View cart “THE 1930’s Collection: The Lash / Big Ben Calling / Flood Tide” has been added to your cart.

The Lash (1934)
Hearty morality tale about a self-made millionaire (Lyn Harding) and the weakling son (John Mills) who lets him down at every turn. Even jumping a ship bound for Australia to return to England and continue an affair with a married woman (Joan Maude). Finally the millionaire gives his son a savage beating with a stockman`s whip. But has either learnt anything? Only time will tell.

Big Ben Calling (1935)
Stars: Leslie French, Mary Lawson, Warren Jenkins, Hughie Green
Comedy Musical in which a Radio shop proprietor, a songwriter and a cafe proprietress start a pirate radio station to help save themselves from financial disaster. They lead the police a merry dance until their secret location is uncovered.

Flood Tide (1934)
Stars: George Carney, Janice Adair, Minnie Rayner.
A shot on location story of life on the Thames Estuary in the 1930`s. After doubts all round Ted (Leslie Hatton), son of a lock keeper, decides he does want to marry Betty (Janice Adair), daughter of a bargee, while the bargee, Bill (George Carney) is more worried about how to win the cup at the Bargee`s Regatta.

The Captain`s Table (1936)
On a transatlantic cruise ship, a musicians wife is found strangled. Suspects are plentiful, but, with the help of one of them, a detective who poses as a steward, the ship`s captain (Percy Marmont) finally discovers the killer. Lively pocket crime drama that moves quickly and makes one wonder why Marmont directed so little. 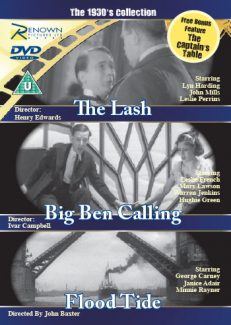