View cart “BUDGIE 8-DVD Set” has been added to your cart.

The Adventures of Robin Hood: The Complete Series 18-DVD Set

The Adventures of Robin Hood:
The Complete Series
18-DVD Set

Richard Greene stars as television’s most famous Robin Hood in ITV’s first smash-hit series from the very early days of British commercial television. First seen in 1955, The Adventures of Robin Hood ran for 143 episodes and its worldwide success gave rise to a whole strand of swashbuckling heroes, including Sir Lancelot, William Tell and The Buccaneers.

Still shown around the world and highly regarded more than 50 years later, this series, more than any other, established a tone and style for the half-hour adventure format series, influencing every series of that kind that followed.

This set contains the complete run of 143 episodes on 18 discs.

Weekly from: Wed 17th June 9am

Timeless entertainment with stories that have thrilled audiences and captured the imagination of generations. Richard Greene is the definitive Robin Hood, the daring, quick-witted hero, who with Maid Marian and his Merry Men, defies the evil Sheriff of Nottingham. 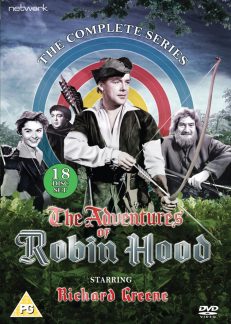