Pat Coombs was the unsung heroine of British comedy. With her distinctive looks and array of funny voices she was instantly recognisable. A favourite ‘foil’ to many of Britain’s top entertainers, including Bob Monkhouse, Ted Ray and Dick Emery, her career spanned more than fifty years. A true Cockney, born within the sound of Bow Bells, Pat was a star on radio from the 1950s and became a much-loved face on television, appearing in series ranging from Beggar My Neighbour and Don’t Drink the Water to You’re Only Young Twice and EastEnders. Film roles included the Carry On films and she made numerous appearances in television adverts and quiz shows. In this affectionate biography, Andrew Ross draws upon Pat’s personal archive, as well as memories from family and colleagues and his own five-year friendship with ‘Patty’, to chart her life and remarkable career. Few actresses have been so loved, not only for their talent as a performer but also for the sweetness of their real-life personality. From her earliest days in wartime London to the final years of her life, this authorised biography is a tribute to an unforgettable lady who touched the lives of many generations. 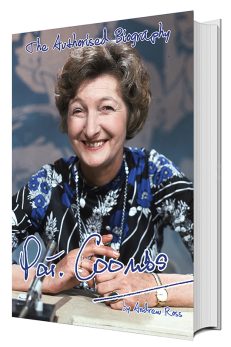 You're viewing: The Authorised Pat Coombs Biography £18.99
Add to cart