Beaconsfield Studios opened in 1922, producing films and TV shows until the 1960s. Run by producer George Clark, with actor/director Guy Newall, the site was chosen to escape the London smog yet remain within easy reach of the city, with country locations for outdoor filming. During World War II, the studios were home to the Crown Film Unit, with 51 productions between 1940 and 1952, many of which were made at Beaconsfield.

The films in this collection are a cross section of the work produced at the studios, with performances from actors as diverse as Donald Pleasence, Susan Shaw, Harry H. Corbett, Hardy Krüger, Stanley Baker, Victor Maddern, Gordon Jackson, Zena Walker, Jane Hylton and Dennis Waterman.

Films included in the collection:

Strictly For The Birds (1964) A British comedy set in the East End of London. Directed by Vernon Sewell it stars Tony Tanner, Joan Sims and Graham Stark, and follows Terry Blessing’s ‘lucky’ day of gambling, meeting friends, losing his job and finding an unknown son.

Blind Date (1959) This murder mystery was directed by Joseph Losey and stars Hardy Krüger, Stanley Baker and Micheline Presle. Set in 1950s London, where a young painter has an affair with a wealthy woman.

October Moth (1960) A psychological drama directed by John Kruse and starring Lee Patterson, Robert Cawdron, Peter Dyneley & Lana Morris. In an isolated Yorkshire farmhouse, a deranged young man imagines a woman he has rescued from a car crash is his deceased mother.

Cat & Mouse (1958) This British crime drama directed by Paul Rotha stars Lee Patterson, Ann Sears and Victor Maddern. An unscrupulous villain falls while trying to trick a young woman into revealing the location of stolen diamonds, but did he die?

Guilty? (1956) Directed by Edmond T. Gréville, this wartime crime drama follows a solicitor (John Justin), who is convinced that a former French Resistance heroine is innocent of the murder charge of a lover whose betrayal resulted in her incarceration in a concentration camp.

Public Nuisance No. 1 (1936) This British musical comedy directed by Marcel Varnel stars Frances Day, Arthur Riscoe and Muriel Aked. After a few drunken escapades in London, a young man is sent to work as a waiter at his uncle’s hotel.

Burnt Evidence (1954) This emotional drama stars Jane Hylton, Duncan Lamont and Donald Gray. A jealous husband suspects his wife of having an affair with his wartime comrade. 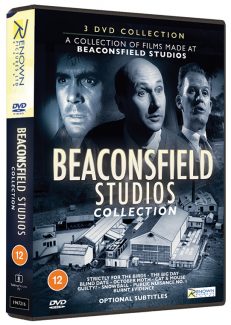 You're viewing: The Beaconsfield Studios 3-DVD Collection £20.00
Add to cart