Featuring three new documentary films with interviews from some of those who were there.

During the Blitz, over 40,000 civilians were killed and more than a million houses destroyed in London alone, plus destruction in many other cities including Liverpool, Hull and the ports. The German’s conducted these mass air attacks against Britain from 1940-1941. Despite the 8-month campaign, the will of the British could not be broken, and the Blitz is remembered in history as a failure. Marking the 80th anniversary of the Blitz, Bruce Vigar’s documentary portrays the main events and aftermath of the German bombings of Britain from 1940-1941. Interviews and archive footage give insight into the atmosphere felt throughout the country, and the attitude that came to be known as the ‘Blitz Spirit’. In spite of their fear, UK citizens experienced a feeling of determination not to be beaten, as German air raids targeted UK cities and bombed the country heavily and almost without respite,  including the use of  V-1 flying bombs, between 7th September 1940 and 11th May 1941.

Eighty years on, The Blitz is a definitive documentary on the build-up to the raids, with detailed footage of the destruction that followed. It features interviews from those who lived through it and reveals the strength of an entire nation who never surrendered.

Stories From The Blitz

Stories from the Blitz features stories from individuals, describing incredible human courage as the air raid sirens went off and they waited for the bombs to drop. Featuring interviews and archive footage from one of Britain’s darkest periods in history.

The Blitz – The Aftermath

With interviews and archive footage, The Aftermath examines the lasting effects of the mass bombings – from the loss of life to the immense damage caused to buildings across the country – and how the Blitz changed the face of Britain’s cities and lives.

These three poignant documentaries reveal personal stories told by witnesses and survivors. People are shown lying on London underground platforms to sleep when shelters were full. Rescuers search through the rubble of collapsed buildings and former RAF members share their memories. The Blitz is a vivid portrayal of an event that brought the nation to its knees, but also revealed the resilience of the British people. 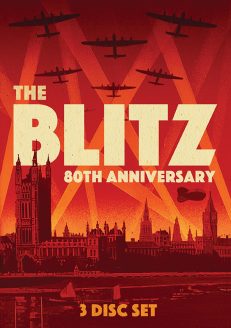