A triple film collection of British dramas: The Silver Darlings, The Quare Fellow and The System.

THE SILVER DARLINGS is a film based on the 1941 novel by Neil M. Gunn about Scottish fishermen, set in the early 19th century after the highland clearances. Catrine and her family, like many other dispossessed Scots, turn their hands to herring fishing.
Drama. Year: 1947. Director: Clarence Elder. Cast: Clifford Evans, Helen Shingler, Norman Shelley, Simon Lack and Hugh Griffith.
A stirring tribute to the men who forged the Scottish fishing industry with their raw courage in the early 19th century. Catrine (Helen Shingler) loses her husband at sea and tries to make a fresh start. Her new love, Roddie (Clifford Evans) skippers a herring boat and her son, Finn, also wants to go to sea.

THE QUARE FELLOW is based on Irish writer Brendan Behan’s first play. A new prison warder is convinced that capital punishment by the state is justified, but after he becomes close to the wife of a condemned man, his beliefs are splintered.
Legal Drama. Year: 1962. Director: Arthur Dreifuss. Cast: Patrick McGoohan, Sylvia Syms, Walter Macken, Dermot Kelly and Jack Cunningham.
Based on the play by Brendan Behan, protesting against capital punishment. A young man from the Irish backwoods takes a job as a prison warder, but he finds his principles tested by the execution of death row inmates, or “quare fellows,” by hanging. The film’s stage origins are apparent as the film features the inmates of the prison, who add depth of character to the story.

THE SYSTEM was crucial in the careers of director Michael Winner and star Oliver Reed. In a seaside village, young men mingle with tourists in search of sexual conquests. It’s a great system, until one of them falls in love.
Drama. Year: 1964. Director: Michael Winner. Cast: Oliver Reed, Jane Merrow, Barbara Ferris, Julia Foster, Harry Andrews, David Hemmings, Ann Lynn, John Alderton and Derek Nimmo.
In the seaside village of Roxham, local lad and photographer Tinker is accustomed to seducing lady tourists and then ditching them. He aims to conquer a fashion model from a well-to-do family, but finds himself unexpectedly falling in love. With the tables turned, Tinker begins to see that maybe it’s not the tourists who are being used each season. 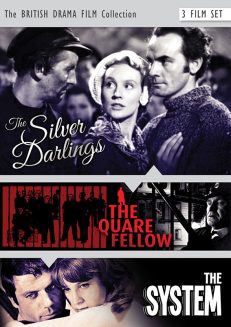