From the Imperial War Museums Collection

A collection of 5 DVDs from the archive of the Imperial War Museums featuring rare and
original wartime films focusing on the British Home Front and life during the war years.
From newsreels to Government information broadcasts of the era, these historical films
provide unrivalled insights into Britain at war.

(2 Discs) Over thirty wartime films showing how Britons contributed to the defence of the nation, from joining the Home Guard – or Dad’s Army as it was known – to contributing scrap items and ‘Digging for Victory’.
Bonus Feature: Wartime Food Flashes

LONDON CAN TAKE IT!

A seven-film collection of wartime films looking at life in London from the outbreak of war through the Blitz to the V-Bomb menace. Includes the celebrated propaganda film covering London during the Battle of Britain, London Can Take It! Portrays the resistance shown by Londoners to the German bombing campaign, opening with the “greatest civilian army ever to be assembled” returning from work to prepare for the “nightly battle of London”. As civilians enter shelters the volunteer services make ready for the coming attack. During the air raid the young and old sleep, while volunteers man guns and stations. After the “all clear” at 6 am, Londoners take stock, clear up and go to work.  Bonus Feature: Manchester Took It Too

WOMEN AND CHILDREN AT WAR

Fourteen films looking at the vital contribution made to Britain’s war efforts by women, and the experiences of evacuee children. From the land girls to the Women’s Institute to those who volunteered or worked in factories, women played a key role in the war effort. For children, war was an experience of separation, bravery and camaraderie.
Bonus Feature: Seven public information films

WORDS FOR BATTLE, WRITERS AT WAR

Features: Laurence Olivier reading extracts from great works by the likes of Milton, Blake and Kipling, illustrated by inspirational film of both a timeless pastoral Britain and a modern Britain poised for war. J. B. Priestley provides the commentary for a film produced immediately after the fall of France, celebrating British values and reminding us that, in the months ahead, Britain stands alone and at bay in guarding ‘the future of the civilised world’. Stanley Holloway delivers an ‘Albert’-style monologue as he persuades the nation to invest in Savings Certificates for the war effort. 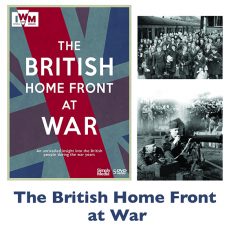 You're viewing: The British Home Front At War Box Set £20.00
Add to cart