This box set of 9 discs includes the entire series (30 episodes in all) of the classic 1960’s television series in which Stuart Damon, Alexandra Bastedo and William Gaunt play three crime fighters with extra sensory powers and extraordinary powers of sight, smell and hearing.

The episodes are: The Beginning, The Invisible Man, Reply Box No. 666. The Experiment, Operation Deep-Freeze, The Survivors, To Trap a Rat, The Iron Man, The Ghost Plane, The Dark Island, The Fanatics, Twelve Hours, The Search, The Gilded Cage, Shadow of the Panther, A Case of Lemmings, The Interrogation, The Mission, The Silent Enemy, The Body Snatchers, Get Me Out of Here!, The Night People, Project Zero, Desert Journey, Full Circle, Nutcracker, The Final Countdown, The Gun-Runners and Autokill.

Craig Stirling, Sharron Macready & Richard Barrett are ‘The Champions’, endowed with the qualities and skills of superhumans, both physical and mental. These gifts were given to them by a secret race of people from a lost city in Tibet, but the gifts are a secret to be closely guarded – a secret that enables them to use their powers as operators of the International Agency, Nemesis!

Stuart Damon, Alexandra Bastedo and William Gaunt played the agents of Nemesis. All three were reunited to contribute interviews and commentaries for this DVD set, for the first time since making THE CHAMPIONS.

Documentary: We Were The Champions, on the making of THE CHAMPIONS, with William Gaunt, Stuart Damon, Alexandra Bastedo, Johnny Goodman, Malcolm Christopher, Ken Baker,
Cyril Frankel and Brian Clemens. Audio commentary on Autokill and The Beginning, featuring the three stars. Audio commentary on Autokill from Malcolm Christopher, Ken Baker and
Roy Ward Baker. Previously unseen version of The Beginning with specially shot bookend sequences. Music by Edwin Astley, Robert Farnon and Albert Elms, with image gallery. The Legend of the Champions feature-length compilation of The Beginning and The Interrogation, made in the early 1980s. 19 Champions trailers from the original film elements. ‘Channel 9’ promos. Image Gallery of Champions memorabilia. Comic strip from the Joe 90 Top Secret comic. Unused title music composed by Robert Farnon. Artistes test footage. A commemorative booklet on the making of The Champions by Mike Richardson.

OUR PRICE £45 with Free UK Postage 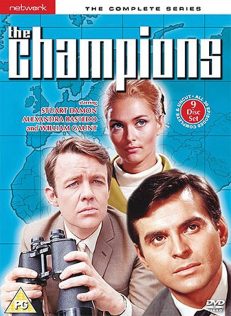