The Christmas Tree with optional subtitles

The Christmas Tree is a charming 1960’s British film from The Children’s Film Foundation about a group of children who are determined to bring a Christmas Tree to the children’s hospital in time for the party.

Gary has been discharged from a children’s ward just in time for Christmas. He is determined to get a tree for his friends on the ward who will be in hospital during the festive season and asks his brother and sister to help. Together they set out to deliver a tree to the children’s ward and we follow them through many adventures as they try to bring a tree to the hospital with no money or means of transport.

Along the way the three encounter lots of adventures, as they attempt their journey by various routes and with the help (and hindrance) of a range of characters. Beautifully played by the three children, with a few familiar faces, this is a tale of good intentions, portraying the kindness of strangers and the determination of the young, infused throughout with the true spirit of Christmas!

Christmas in Britain in the 1950s Join the festive cheer all over the country in this short film showing how Christmases past were celebrated in London, the great British countryside and a traditional British home.

Christmas Round Nan & Grandads…  Amateur footage of a glimpse of a traditional Christmas Tea in the 1950s.

Early One Morning (1937) A classic Swedish documentary by Gösta Roosling about an early morning Christmas service in a country church.

Family Christmas Glimpses Nostalgic home videos of families tucking into their Christmas dinner with all the generations together, dressed up in their festive finery.

The Night Before Christmas (1946) A beautiful adaptation of the famous poem with a mixture of animation and live action.

Christmas Rhapsody (1948) A charming Christmas film made in 1948 about a small, lonely pine tree that wishes to be chosen for Christmas and taken home.

Christmas Under The Sun (1947) The joys of living in Australia at Christmas time. Cool drinks take the place of hot refreshments and much of the time is spent outdoors, but the spirit of Christmas is unchanged. 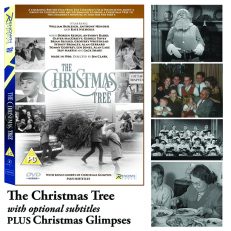 You're viewing: The Christmas Tree with bonus shorts: Christmas Glimpses £15.00
Add to cart