THE COUNT OF MONTE CRISTO

The acclaimed adaptation of the novel by Alexandre Dumas.

This lavish costume drama based on the novel by Alexandre Dumas is set in the early 1800s. Alan Badel leads a distinguished cast in one of the greatest tales of betrayal, adventure, romance and revenge ever written. This 12-part series is now widely considered to be one of the finest adaptations of the legendary story.

Edmond Dantes is a brave and honest young man whose peaceful life and plans to marry the beautiful Mercedes are abruptly shattered when he is falsely accused by those jealous of his good fortune. Unlawfully sentenced to the infamous island prison of Chateau D’If, Edmond is destined to spend the rest of his days behind bars. While imprisoned, he meets the Abbé Faria, a fellow prisoner whom everyone believes to be mad. The Abbé tells Edmond of a fantastic treasure hoard hidden away on a tiny island, the location of which only he knows. When Edmond manages an audacious escapes from the prison, he sets off to find the treasure and exact revenge on those who wronged him.

The series was made in 12 episodes and had an intense, theatrical style. The script remained largely faithful to the original plot and is regarded as the best screen version of the story, with Badel as the definitive Count. It was produced by Campbell Logan and directed by Peter Hammond with a screenplay by Anthony Steven. The series is elegant and ambitious, with lavish costumes and sets with Gothic lighting. The fact that it is black and white only adds to the drama and accentuates the beautiful sets and intense performances. The series is gripping throughout, keeping the viewer engaged through to the final scenes.

Episodes: The Plotters; The Chateau D’If; The Abbe Faria; A Perilous Journey; The Isle of Monte Cristo; A Garden in Auteuil; Unlimited Credit; Evidence of a Crime; News from Janina; A Challenge; Dishonour; An End to Revenge. 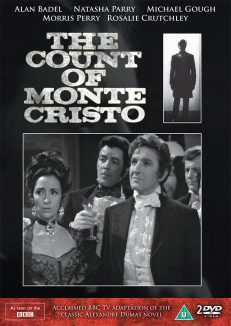