A devil-beast haunts the lonely moor around the Baskervilles’ ancestral home. A legend warns the descendants of that ancient family never to venture out on the moor “… in those dark hours when the powers of evil are exalted.” One of the Baskervilles, Sir Charles, is dead, and the footprints of a giant hound had been found near his body. Would the new heir to the Baskervilles meet the same dreadful fate?

Richard Hannay is warned of an assassination plot that has the potential to take Britain into a war. A few days later he discovers the murdered body of the American who warned him and becomes a prime suspect. He flees to the moors of Scotland, pursued by the police and German spies involved with stealing British plans.

The Moonstone, a priceless Indian diamond brought to England as spoils of war, is given to Rachel Verrinder on her eighteenth birthday. That night, the stone is stolen. Suspicion then falls on a hunchbacked housemaid, on Rachel’s cousin Franklin Blake, on a troupe of mysterious Indian jugglers, and even on Rachel herself.

These audio books represent some of the greatest works of fiction ever written in the English language. Each expertly abridged novel has been selected for its narrative power, range of characters and its place in our literary heritage. 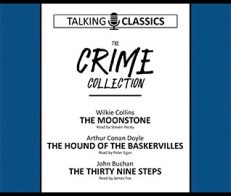 You're viewing: THE CRIME COLLECTION CD Audio Book on 6 CDs £19.99
Add to cart