View cart “No Lady / Her First Affaire / Shipmates O’Mine” has been added to your cart.

SPECIAL DEAL: £15 For both DVDs

According to the officer’s handbook, “an officer will perform whatever task confronts him with whatever men are available” and for Major Bell the men in question are drunks, thieves and deserters. With the German army closing in on his company’s position, Major Bell undertakes a suicidal mission to blow up a bridge of strategic importance to the enemy. His only help will come from a rag-tag band of army rejects who must become heroes if they are to fulfil their mission and come back alive.

When Diana, a popular stripper at the famous Flamingo Nightclub, collapses and dies on stage, her death is quickly attributed to “natural causes”. However, the club’s comic (and Diana’s beau), is not convinced. The police aren’t interested so he sets out alone to find some answers. He soon finds that he’s treading a dangerous path. Luckily he doesn’t have to do it all alone, encouraged my fiesty stripper Angelin, the club’s showgirls are willing to help and together they set a trap to expose the truth… 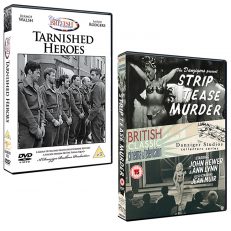