A 3-DVD Box set of 13 films and shorts from one of Britain’s most loved film makers. E. J. (Edwin John) Fancey is the sort of British film-maker whose efforts to provide entertainment on a minimal budget, and with a shooting schedule that may be best described as break-neck, were quite heroic.

If few of his pictures could be described as “polished” – Fancey’s own office sometimes was called into service as a film-set – they do provide an invaluable look at the London landscape of the 1950s. This is a world of steam railways, dance halls and police inspectors arriving in the nick of time in their black Wolseley motor cars.

As narratives, his various crime dramas and comedy revues just zip along. A Fancey picture often benefitted from a strong cast; the Canadian actor Paul Carpenter, that British B-film stalwart; E J’s daughter Adrianne Scott and even, with The Traitor, Sir Donald Wolfit. He also possessed a considerable ability to spot embryonic talent and emerging trends – Forces’ Sweetheart features a rare cinematic appearance by Michael Bentine and in June 1957 Rock You Sinners became one of Britain’s first rock and roll films. And who could resist the sight of Jackie Collins dancing to the sound of Tony Crombie and His Rockets?

Fighting Mad (1957)
Directed Denis Cavanagh. Produced by E J Fancey under the pseudonym Edwin Scott. Stars: Joe Robinson, Adrienne Scott, Beckett Bould, Jack Taylor, Colin Clemenson, Ross Walters, Bernard Walters and Geoff Roberts.
Synopsis: A simple story of a Glaswegian ex-boxer who decides to start life afresh with his young bride in Canada and arrives in time to save his old uncle from being a victim of crime.

Hangman’s Wharf (1950)
Directed by Cecil H Williamson. Produced by E J Fancey. Stars: John Witty, Genine Graham, Campbell Singer, Patricia Laffan, Gerald Nodin, Frederick Allen, Max Brimmel, Molly Looe, Patience Rentoul, Tom Masson, Barry Faber, Maureen Williamson, Harry Hearn and R C Huggins.
Synopsis: A doctor establishes a practice in Shadwell in the East End of London, but suspicion keeps the locals away. One night he is called out to an accident on a ship, but upon arrival he finds that no accident has actually occurred and instead he is framed for a murder.

Shadow Of A Man (1955)
Directed Michael McCarthy. Produced by E J Fancey. Stars: Paul Carpenter, Rona Anderson, Jane Griffiths, Tony Quinn, Ronald Leigh-Hunt, Bill Nagy, Jack Taylor, Robert O’Neil, Rose Alba, Geoffrey Wilner, Diana Chesney and Jackie Brown.
Synopsis: A town drunk, Paul, is found dead the morning after he and his wife celebrated their tenth anniversary out at a nightclub. Despite the initial verdict of heart failure as cause of death, the police reopen the case believing it be murder.

Who’s Crazy (1950)
Produced and compiled by E J Fancey. A documentary short featuring oddities from around Britain, featuring Charles Macey (the backwards walker) and knife thrower Wally Texan among others.

To-day and Every Day (1948)
Directed by Cecil H Williamson. Produced by E J Fancey. Narrated by Frank Phillips. This is a rare short informative film with some superb vintage footage of locomotives and stations in the UK, including Paddington. The film details the history of the locomotive in Britain and we get to see not only inside the trains but the entire experience from that time, from shovelling the coal on the footplate to the comfort of the passenger.

Swing Tease (1940)
Directed by Denis Kavanagh. Produced by E J Fancey. Stars: Evelyn Dall, Nat Gonella and his Georgians and The Mills Brothers.
Filmed at Rock Studios, Borehamwood, Hertfordshire, this is a condensed digest of musical acts from the feature Sing As You Swing (1937). 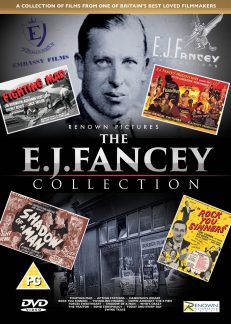 You're viewing: The E J Fancey Collection £20.00
Add to cart