Collection of eleven 1930s Westerns. In ‘A Demon for Trouble’ (1934) Bob Worth (Bob Steele) is wrongly accused of murdering a ranch owner and sets out to prove his innocence and find the true culprit with the help of Mexican outlaw Golinda (Don Alvarado). ‘Fighting Caballero’ (1935) follows widow Pat (Dorothy Gulliver) as she arrives in a mining town to investigate her husband’s death. ‘Big Boy Rides Again’ (1935) follows Tom Duncan (Guinn Williams) as he searches for his father’s masked killer. In ‘The Cactus Kid’ (1935) a cowboy is framed for murdering his partner at the end of a cattle drive and hunts for the real killer. In ‘In Old Montana’ (1939) cavalryman Fred Dawson (Fred Scott) investigates an escalating dispute between local shepherds and cattlemen and tries to broker a peace between the two parties. ‘Law and Order’ (1936) follows Texas Rangers Tom and Jimmy (Tom Tyler and Rex Lease) as they go after a gang of munitions smugglers. In ‘The Call of Justice’ (1936) cowboy Steve Harper (Bill Cody) is framed for murder and breaks out of jail to find the real culprit. In ‘Frontier Days’ (1934) The Pinto Kid (Cody) stumbles upon a plot to kill a wealthy ranch owner but is framed for his death and put in jail, leaving him no choice but to escape and find the real killer. In ‘The Invisible Message’ (1935) Bill Williams (Williams) inadvertently comes into possession of a treasure map and is pursued by a group of criminals eager to get their hands on the loot. ‘Knights of the Plains’ (1939) follows outlaw Clem Paterson (Richard Cramer) and J.C. Rand (Frank LaRue) as they hatch a scheme to rob homesteaders of their land so they can purchase an entire valley. Finally, in ‘Desert Mesa’ (1935) Jim Kirk (Wally West) searches for the man who conned his father in Cottonwood, Arizona. 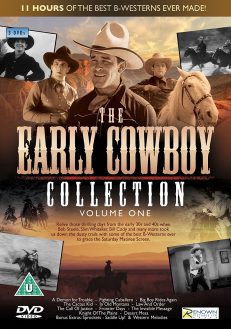 You're viewing: The Early Cowboy Collection Volume 1 £20.00
Add to cart