Together for just  £20 with FREE UK postage.

The fabulous life story of ‘Mr Trombone’ & ‘Mr Sax’ in this musical film biography of Tommy and Jimmy Dorsey.

Launched on a musical career early in life by their father, Tommy and Jimmy Dorsey became music legends – but their frequent arguments lead to a bitter parting of ways. The film follows the brothers through their career, from the early days in the same band, to working with the famous Paul Whiteman and then leading their own orchestra, when they finally split up. The acrimonious dispute between the brothers brings the Dorsey family nothing but heartache, until a family tragedy reunites the brothers.

A superb visual record of the Dorsey Brothers and their music, this film is packed with musical numbers, including Marie, Green Eyes, Never Say Never and The Object of My Affections.

The most popular and commercially successful bandleader of the Big Band Era, Tommy Dorsey, enjoyed phenomenal success coinciding with almost the entire duration of the era.
The band enjoyed an incredible run of 286 Billboard chart hits, of which 17 were number ones. Presented here are 40 key recordings, including performances by Frank Sinatra.

Disc 1 I’ll Never Smile Again / Music, Maestro, Please / Alone / Boogie Woogie / Marie /  On Treasure Island / Satan Takes A Holiday / The Big Apple / The Music Goes ‘Round And ‘Round / Song Of India (From Rimsky-Korsakov’s ‘Sadko’) / Nola / In The Still Of The Night / Who? / The Dipsy Doodle / Stop Beatin’ Round The Mulberry Bush / Says My Heart / Our Love  / All The Things You Are / Indian Summer / It’s Always You

Tommy and brother Jimmy worked in bands led by Tal Henry, Rudy Vallee, Vincent Lopez, and Nathaniel Shilkret. In 1923, Tommy followed Jimmy to Detroit to play in Jean Goldkette’s band and returned to New York in 1925 to play with the California Ramblers. In 1927 he joined Paul Whiteman and in 1929, the Dorsey Brothers had their first hit with Coquette for OKeh Records. Tommy Dorsey formed his own band in 1935. His orchestra was known primarily for ballads at dance tempos, frequently with singers such as Jack Leonard and Frank Sinatra. In 1953, the reunited brothers appeared on Jackie Gleason’s CBS television show. 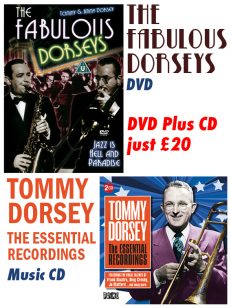 You're viewing: The Fabulous Dorseys DVD AND Tommy Dorsey The Essential Recordings Music CD together for £20 £20.00
Add to cart