The fabulous life story of  ‘Mr Trombone’ & ‘Mr Sax’ in this musical film biography of Tommy and Jimmy Dorsey.

Launched on a musical career early in life by their father, Tommy and Jimmy Dorsey became music legends – but their frequent arguments lead to a bitter parting of ways. The film follows the brothers through their career, from the early days in the same band, to working with the famous Paul Whiteman and then leading their own orchestra, when they finally split up.

The acrimonious dispute between the brothers brings the Dorsey family nothing but heartache, until a family tragedy reunites the brothers.

A superb visual record of the Dorsey Brothers and their music, this film is packed with musical numbers, including Marie, Green Eyes, Never Say Never and The Object of My Affections. 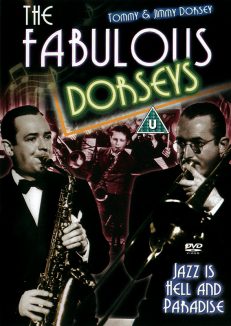 You're viewing: The Fabulous Dorseys DVD £13.00
Add to cart