The day before his retirement an old engine-driver reports his stoker for being drunk. The stoker is fired and warns that he will make trouble for the driver and crew. On the day of the last run, the driver’s daughter is on the train and notices that the ex-stoker is also aboard, unaware that he intends to separate it from its carriages – with disastrous consequences.

The film was shot aboard the Flying Scotsman with Ray Milland in his first acting role and Pauline Johnson, a leading British silent actress, in one of her last. Her father is played by Moore Marriott, best remembered for the films he made with Will Hay.  All the stunts were filmed on the moving train using the actors – Pauline Johnson manoeuvres along the outside in high heeled shoes while travelling at speed. The film was originally intended to be silent, with the decision to switch to speech made during production. Early scenes include captions and music with sound dialogue appearing later. Film historians regard the film as one of the most remarkable achievements of the pre-War British film industry. 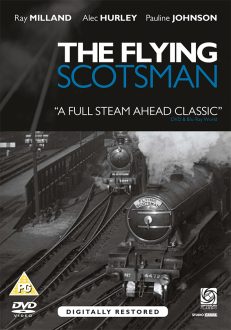 You're viewing: THE FLYING SCOTSMAN DVD £15.00
Add to cart