The  tour will be  followed by a Frank Marker quiz after the meal.

Location for all tours starts and ends at:

Please arrive 15 minutes before the start time outside the pub.

Lunch or Dinner (drinks not

Toad In The Hole

with mash, gravy and steamed greens

Drinks are not included

To reserve your place on the tour, please call us now on Freephone

Please bring comfortable shoes, a mac and a bottle of water.

Frank Marker fans will be delighted to hear that we have arranged a walking tour of his old patch in Windsor, visiting the scenes of his triumphs and defeats, as well as some interesting locations from British film history. There will be plenty of photo opportunities as we follow Frank’s footsteps through the ancient town, but do bring comfortable shoes, as the tour is two hours long. Afterwards, there will be time for a meal at The Carpenters Arms  followed by a Frank Marker Quiz. The price also includes a souvenir
limited edition guide book, and an exclusive Frank Marker Fan Club Badge.

Cynical, dour and world-weary, private eye Frank Marker was not the most glamorous of private detectives, yet his stoic personality and downbeat lifestyle in a series of bedsits and rented  offices endeared him to a generation of TV fans and the series remains hugely popular. The case of a failing businessman led Frank to the leafy environs of Windsor; renting an office at
93 Eton High Street – probably his best-known and certainly his most picturesque location. 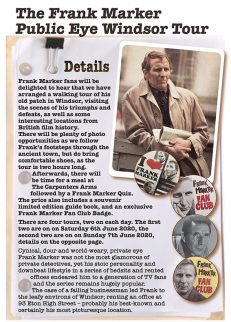