View cart “The Ghost Train” has been added to your cart.

Tommy Gander, a concert comedian; Teddy Deakin, his pal; Jackie Withorp and her cousin Richard Winthrop; Miss Bourne, a spinster visiting evacuees, Herbert and Edna, an engaged couple, and Dr. Sterling, travelling on a train to Cornwall miss their connections owing to a delay and have to spend a night in the waiting room of the eerie Cornish railway junction for Fal Vale.

The station master tells them the story of the Ghost Train which is reputed to haunt the station. The story runs that 43 years ago a previous station master fell dead whilst trying to operate the remote control of a swing bridge and a train roared through the gap in the open bridge into the river below. The legend was that some nights a warning bell sounded at the station and the train in phantom form thunders by bringing death of all who gaze upon it.

That night the station master is found murdered. Edna and Herbert leave the station, scared, but return later in panic pursued by a terror stricken girl, Julie, a mental patient escaped from a nearby home, and eager to gaze upon the fatal ghost train. She is followed by Price who claims to be her brother and wishes to take her back. Suddenly the roar of a train is heard in the night and the Ghost Train thunders through the station… 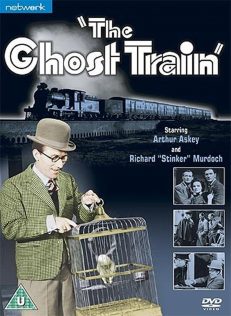