American actor Alex Nicol heads the cast of this 1954 British crime melodrama, The Gilded Cage. Steve, (Alex Nicol) a US security officer, finds that his brother in London is involved in a
racket to smuggle a priceless painting out of the country. Things hot up, a murder is committed and the brothers are caught up in the affair. They have to fight hard to expose the gang behind the smuggling and murder.

A Tempean production directed by John Gilling, produced by Robert S. Baker and Monty Berman, responsible for the TV adventure series The Saint. 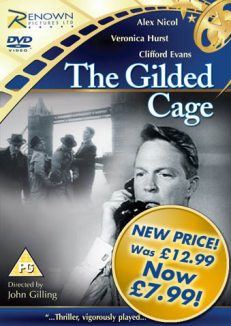