The Golden Salamander on DVD

Based on the book by Victor Canning, Golden Salamander is a tense post-war British noir thriller set in the heat of North Africa, with a superb cast.  It was an award-winning film at the 1950 Locarno film festival.

Archaeologist David Redfern is sent by the British Museum to Tunisia to recover art treasures. He arrives in the sleepy fishing village of Kabarta and is welcomed to the only hotel by the beautiful Anouk. Sensing tension in the village, Redfern begins his work of recovering and cataloguing the treasures under the watchful eye of curator Serafis. While falling in love with Anouk, he uncovers a gun-running operation and discovers hidden secrets and dangers in the north African village. 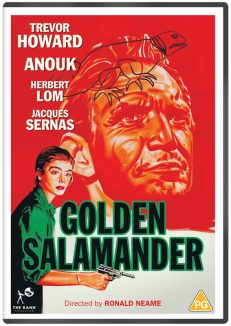 You're viewing: The Golden Salamander on DVD £15.00
Add to cart