The Good Die Young on DVD and Blu-Ray

When Giants Fought (1926, 31 mins): a contentious bare-knuckle conflict of 1810 is revisited in this power-packed silent boxing drama, with new music by Mordecai Smyth.

Under Night Streets (1958, 20 mins): after the last tube has gone, an army of underground workers get busy down below.

Not Like Any Other Director: Lewis Gilbert (1995, 34 mins): Michael Caine introduces the director of The Good Die Young, in an on-stage interview at Londonís National Film Theatre. 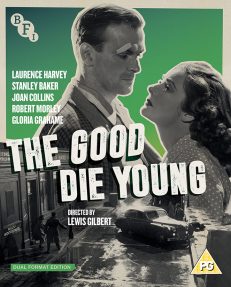