View cart “COI Collection Vol 1: Police and Thieves 2 DVDs” has been added to your cart.

The Greed Of William Hart

This classic tale of grave robbers and murderers who sold corpses for medical science was banned in its
original title of â€œBurke and Hareâ€, which was of course a true story.

The film is set in Edinburgh in the 1800`s starring Tod Slaughter as William Hart; this dark and gory film tells the story of the infamous grave robbers. Burke was hanged and Hare avoided the gallows by testifying against Burke. This film is rarely seen and is graced with a fine cast. Alongside Tod Slaughter, top honours go to Henry Oscar (1891-1969) as Mr. Moore who equals Slaughter`s treacly malevolence to such an extent that neither actor steals the scenes over the other. It is equally delightful to see a very
young Aubrey Woods and also Tod`s wife Jenny Lynn in the role of Helen Moore 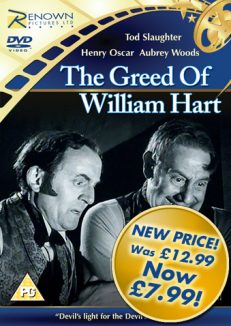 You're viewing: The Greed Of William Hart £7.99
Add to cart