Gritty drama highlighting challenges faced by the ‘Windrush’ generation of West Indians who made their home in England in the 1950’s.

Young Londoner Danny Willard (David Hemmings) calls into the ‘Caribbean Centre’ on his paper round. He meets Victor (Earl Cameron), a recent arrival to England who works as a crane operator at the London Docks. All is not what it seems at the Centre and ruthless criminals frame Victor for a crime he did not commit. Victor must evade both the Police and the criminals and has to rely on the help of Danny and his Grandad (James Hayter) to clear his name.

The Heart Within is one of the first British films to include a significant cast of black actors – led by Earl Cameron with Dan Jackson, Gloria Ann Simpson, Frank Singuineau and Pauline Henriques. The soundtrack of the film was provided by ‘The Kings of the Caribbean’ Steel Band. 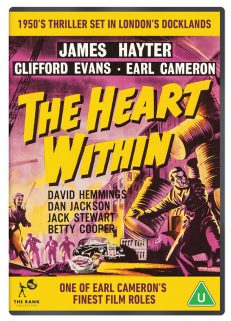