An all-new volume of star interviews all connected by the Isle of Wight.
Whether they were born there, lived there, or made memorable appearances on the island, you are sure to find their stories in this magnificent new book!
New Release Book Offer: £12.99 with free postage
Signed by the author John Hannam
John’s third book in his The John Hannam Interviews series is called The Wight Connections and is about people from the Isle of Wight.

Over the years the south coast island has been a haven for show biz stars and included in this new book are many famous people who were born there,lived there or made historic appearances there.
Many famous stars were actually born on the Isle of Wight and several have their own chapters in the book. These include Brian Murphy, Sheila Hancock, Phill Jupitus, Cliff Michelmore, Mark King,from Level 42, Raymond Allen,the creator of Some Mothers Do’Ave’Em, and Anthony Minghella. The foreword is by another Islander,popstar CraigDouglas. Also featured are stars who moved to the Isle of Wight at an early age These include actors Laura Michelle Kelly and Stephen Wight.
So many stars have moved to the Isle of Wight in past years and those featured in chapters of their own include Celia Imrie, Michael Sheard, most famous for playing Mr Bronson in Grange Hill, Dick Taylor, from the Pretty Things, Michael Grade, Kenneth Kendall, Alan Titchmarsh and Billy Whittaker and Mimi Law. Roy Barraclough is also in the book. His first-ever professional engagement was a summer season at a small local holiday camp.
Treat yourself to this fabulous signed edition for just £12.99 with free UK postage. 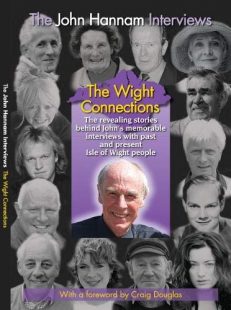 You're viewing: The John Hannam Interviews: The Wight Connection £13.99
Add to cart