The Long Day Closes
A film by Terence  Davies

Set in 1950s Liverpool, where eleven-year-old Bud, (a heartbreaking performance from Leigh McCormack), finds escape from the greyness of 50s Britain through trips to the cinema.
However, as he gets older, the agonies of the adult world; the casual cruelty of bullying, the tyranny of school and the dread of religion, begin to invade his life. Terence Davies’ lyrical hymn to childhood focuses on his own memories of growing up in a working-class Catholic family in Liverpool. Time and memory blend and blur through fluid camerawork; slow tracking shots, pans and dreamlike dissolves all combine to create the world of Budís imagination and the lost paradise of his childhood. 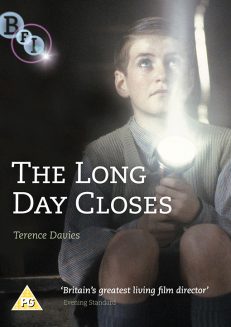