View cart “Svengali” has been added to your cart.

The Magic Box on DVD

See 60 famous film stars in the romantic story of the one of the pioneers of British film history!

This 1951 biographical drama was directed by John Boulting with cinematography by Jack Cardiff and stars Robert Donat, as William Freise-Greene, the designer of one of the earliest working movie cameras, British inventor and pioneer in cinema. The film follows the life of this talented and inspiring man, who should be revered but is sadly little remembered today. Told in
flashback, the film follows the inventor’s search for a way to project moving pictures, an obsession that changed the lives of those he loved. 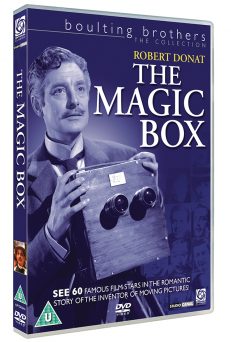