The Mind of Mr J.G. Reeder

The Complete Series in a 4-DVD Box set

The Mind of Mr. J.G. Reeder, released for the first time. This complete set brings together both series, screened between 1969 and 1971.

This classic Thames drama series, based on the short stories by Edgar Wallace, features one of the unlikeliest fictional sleuths: Mr. J.G. Reeder, a mild-mannered civil servant at the Department of Public Prosecutions. But Mr. Reeder, played by Hugh Burden, has an unusual ‘gift’ – he can think in exactly the way a criminal does. In 1920s London, his talent for
cracking crimes is known throughout the underworld, and much valued by his department head, Sir Jason Toovey; bank heists, jewel thefts and murder are among the many and varied cases that are passed on to Mr. Reeder to solve in his own way…

As seen on Talking Pictures TV! 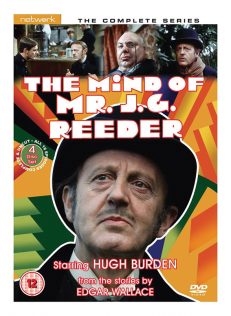