The Old Joke. A novel by Reina James, daughter of Sid James.

The second novel from Reina James, daughter of Sid James.

Reina James (born 1947) has written two novels, the first of which won the Society of Authors’ McKitterick Prize in 2007. In her 20s she appeared in the stage play John, Paul, George, Ringo … and Bert by Willy Russell and later appeared in Russell’s musical Blood Brothers. She is married to Mike Reinstein, a musician.

Mim Lyons is a retired film actress, occasionally still recognized from her last great starring role in the late 1960s, but now more than content to restrict her performances to occasional play-readings with a group of old friends from the theatrical world. However, when her agent calls out of the blue with a job offer, her husband schemes about the possibility of a comeback in a role that unsettles Mim’s perception of how he sees her – and of who she really is. As Mim struggles to preserve the quiet existence she has created, it becomes impossible to ignore the turmoil in the lives of those closest to her. While her friends’ marriages hit the rocks, her son struggles to clean up his act and her estranged daughter floats back into her life, Mim begins to reassess the roles she has been playing – as friend, daughter, mother and wife – and to decide exactly who she wants to be. 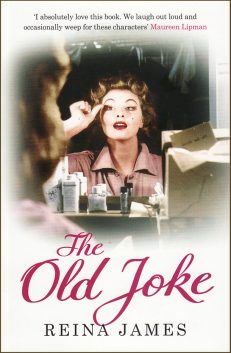 You're viewing: The Old Joke. A novel by Reina James, daughter of Sid James. £9.99
Add to cart