AndrÃ© De Toth directs 1947`s The Other Love, which was re-released theatrically in 1953 under the title Man Killer. The film is based on a story by Erich Maria Remarque, well-known for their work on action-packed war flicks (Remarque`s All Quiet on the Western Front) and westerns (De Toth`s Day of the Outlaw).
This film is a tear-jerking romantic drama with music by the incomparable Miklos Rozsa.

Seriously ill concert pianist Karen Duncan (Barbara Stanwyck) is admitted to a Swiss sanitorium. She is attracted to her suave Doctor Stanton (David Niven) who prescribes lots of rest and fresh air. Karen decides to enjoy whatever life she has left in the night clubs of Monte Carlo in the presence of dashing Paul Clermont (Richard Conte). Doctor Stanton does all he can to save Karen. 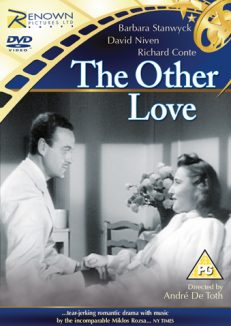