View cart “SAILOR. THE ORIGINAL TELEVISION SERIES 3-DVD Set” has been added to your cart.

The 19 surviving episodes of the 23 originally broadcast.

Widely praised for its sharply comical script, energetic performances and its groundbreaking strong female characters, the series gave us an iconic catchphrase which became a popular slogan across the nation.

Penny-pinching Harold Fenner, (Peter Jones), runs Fenner Fashions, a small garment factory in London that makes high quality clothing. Things rarely run smoothly, as militant shop steward Paddy Fleming Miriam Karlin), who leads the female workforce, constantly disrupts the daily routine. She’s always on the lookout for any excuse to take Fenner on and lead the women out on strike, ordering “Everybody out!”.

Written by Ronald Wolfe and Ronald Chesney, who went on to write On the Buses, Meet the Wife and Wild, Wild Women, The Rag Trade was broadcast between 1961 and 1963. This box set contains all 19 surviving episodes from the first two series of 23 broadcast.

The exasperated workforce includes Carole, (Sheila Hancock), Little Lil, (Esma Cannon), Shirley, (Wanda Ventham) and Gloria, (Barbara Windsor). Stuck in the middle of the regular disputes is poor downtrodden foreman Reg, (Reg Varney). He tries to keep the peace between his boss and his colleagues – and fails miserably!

The early episodes of The Rag Trade have a lot in common with the Boulting Brothers’ trade union film comedy I’m All Right Jack (1959). Both satirised management/worker relations at a time of growing shop floor militancy. However, what sets The Rag Trade apart from other TV comedies of its time was the predominantly female cast, the seamstresses of Fenner Fashions, a sweat-shop in London’s East End, who got all the best lines at the expense of their male bosses. The working class female factory staff  was loud, unruly, boisterous and disruptive, an uninhibited, female working class culture not much in evidence on BBC television at the time. Filmed before a live studio audience, the cast members’ interplay with each other responds to the audience reaction, creating true comedic drama. 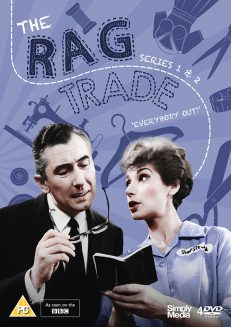