Over 10 hours of vintage comedy in a fabulous 3-DVD box set. Six features plus bonus interview with Liz Fraser and a short comedy bonus.

Our next film stars Peter Sellers, Dick Emery, Pamela Thomas and Spike Milligan in: ‘THE CASE OF THE MUKKINESE BATTLE-HORN’ (1956). The story sees Quilt and Brown investigate the battle-horns disappearance and meet a few eccentric characters along the way. Directed by Joseph Sterling.

‘THE BUTLER’S DILEMMA’ (1943) stars Richard Hearne (Mr Pastry) as Rodney, who has to impersonate a butler in exchange for having his large gambling debts written off. The film co-stars Hermione Gingold and Henry Kendall. Directed by Leslie S. Hiscott.

‘GERT & DAISY CLEAN UP’ (1942) is a “lost” film restored and available for the very first time on DVD in this box set. The title characters (Elsie and Doris Waters) help the war effort and foil a racketeering plot! Directed by Maclean Rogers, starring Elsie Waters, Doris Waters and Iris Vandeleur.

In ‘GERT & DAISY’S WEEK-END’ (1942) the two East End sisters volunteer to escort a group of evacuee children out of Blitz-torn London into the safety of the countryside. Directed by Maclean Rogers, starring Elsie Waters, Doris Waters and Iris Vandeleur.

‘YOUR MONEY OR YOUR WIFE’ (1960) follows married couple Pelham (Donald Sinden) and Gay Butterworth (Peggy Cummins) as they unexpectedly run into money troubles. Directed by Anthony Simmons, starring Donald Sinden, Peggy Cummins, and Richard Wattis. Gay Butterworth’s aunt dies and the inheritance goes to her. However, her husband Pelham finds another version of the will in which she only gets the interest on the capital, forcing them to rent out rooms in their house to pay off their debts. Then Gay comes up with the idea of divorcing Pelham, which would allow her to inherit all the money and they try and decide which tenant he should have an affair with to spark off the divorce.

This wonderful collection also includes a new interview programme with LIZ FRASER ‘HER LIFE IN FILM’ and rounds off with the short feature ‘COMEDY COCKTAIL’ (1951), which features clips from Charlie Chaplin films. 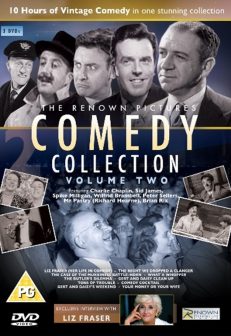 You're viewing: The Renown Comedy Collection Volume 2 £20.00
Add to cart