Over 11 hours of vintage crime drama in a stunning 3-DVD box set of 10
films.

A GUNMAN HAS ESCAPED
(1948) starring John Harvey and written by John Gilling, centres around
a passer-by who is killed during a robbery in London by three armed
men.
Making a debut on DVD in this set is BOY WITH A FLUTE (1964), a
“lost” film now restored and featuring Freda Jackson and Andree Melly, in a
tale of paintings and forgery. The only feature to be directed by Stephen
Clarkson.

DEATH GOES TO SCHOOL (1953) – stars Gordon Jackson and Barbara Murray in a rare old British mystery surrounding a strangulation at a school, which requires the attention of Scotland Yard.

The great Tod Slaughter, a master of macabre crimes, stars in,                     KING OF THE UNDERWORLD (1952) with Patrick Barr and Tucker McGuire in a tale of greed and murder, adapted from the lost television series Inspector Morley,Late of Scotland Yard, Investigates.

You will witness the film debut of Sid James in BLACK MEMORY
(1947), starring Michael Medwin as Danny Cruff, who hobnobs with London’s underworld after his father is wrongly accused of murder.

Dennis Price stars in
MURDER AT 3AM (1953); a story of a serial killer who kills at
precisely that time!

In THE CHALLENGE (1960), Jayne Mansfield makes a departure from
her usual roles to play tough girl Billy. in this dark and brooding drama.

PASSPORT TO TREASON (1956)
stars Rod Cameron as a US Private Eye who takes over a case for a murdered friend.

Gordon Jackson is back in THE PRICE OF SILENCE (1959)
about a man making a new life for himself after his prison release, but
his past is catching up!

Finally THE SECRET MAN (1958) which stars Marshall Thompson, John Loderand Henry Oscar, in the story of a physicist drawn into an investigation to locate a spy. 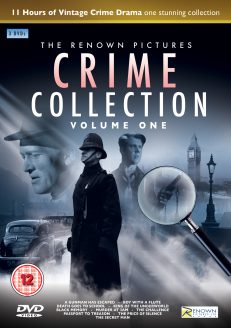 You're viewing: The Renown Crime Collection Volume 1 £20.00
Add to cart