BLACKOUT (1950) directed by John Gilling. Starring Dinah Sheridan and Maxwell Reed as a blind man who stumbles across a dead man and starts investigating when his sight is restored.

13 EAST STREET (1952) Director: Robert S. Baker. Starring Patrick Holt, Sandra Dorne and Sonia Holm. When Police Inspector Gerald Blake wants to infiltrate a London stolen-goods gang, he does a thorough job of it, as he robs a jewellery store, gets arrested and sent to prison! Filmed at the Alliance Studios, Twickenham, Middlesex.

MYSTERY AT MONSTEIN (1954) Director: Joe Mendoza. Peter Illing narrates this short film about a ski-champion Uncle who is after an inheritance.

WEB OF EVIDENCE (1959) Director: Jack Cardiff. Starring Van Johnson, Vera Miles and Emlyn Williams. A British-American returns to England after 20 years to discover that his father has been jailed since World War II, for a murder that took place in very murky circumstances. Filmed at Walton Studios.

WHEN LONDON SLEEPS (1932). Director: Leslie S Hiscott. Starring Harold French, Francis S. Sullivan and Alexander Field. Slippery Rodney Haines runs a high-class gambling joint in Hampstead, while elsewhere in London Lamberti’s fair for the less well off is on its last legs. The only link seems to be Tommy Blyth. His betting has put him in serious debt with Haines and he also fancies Mary, the adopted daughter of Lamberti. But in fact there is one other link! Filmed at Twickenham Film Studios, St Margaret’s, Twickenham, Middlesex.

THE LOST HOURS (1952) Director: David McDonald. Starring Mark Stevens, Jean Kent and John Bentley. During a London reunion of an RAF unit, an American pilot gets into a fight with one of his buddies, who is drunk and belligerent. The next day the pilot wakes up in a strange hotel room with blood on his suit and can’t remember how he got there. Then he discovers that the friend he fought with the night before has been found murdered and he is now the prime suspect. Filmed at London and Denham Studios.

THE PASSING STRANGER (1954) Director: John Arnold. Starring Lee Patterson, Diane Cilento and Duncan Lamont. A girl who works at a roadside café for truckers, with her protective and plain sister Olive Gregg meets a solid but rather unperceptive trucker who wants her to be his girl. She is hesitant, as she seeks a way to spread her wings and escape her dreary and constricted life. An American soldier (Patterson), also wants to escape and arrives at the café hidden in a truck.

THE HOSTAGE (1956) Director: Harold Huth. Starring Ron Randell, Mary Parker and John Bailey. Filmed at Elstree Studios, this is the story of a South American revolutionary who is facing death for murder, but the President’s daughter is a hostage in London.

THE END OF THE LINE (1957) Director: Charles Saunders. Starring Barbara Shelley and Alan Baxter. The wife of a night club owner frames a writer for her husband’s murder. 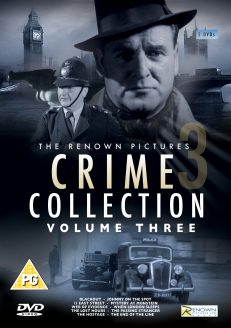 You're viewing: The Renown Crime Collection Volume 3 £20.00
Add to cart