Renown Pictures are delighted to present THE CRIME COLLECTION: VOLUME 4. No less than 8 marvellous crime films with some terrific bonus features in this 3 DVD box set!

THE BOYS (1962) Directed by Sidney J Furie and starring some of the finest British actors of the sixties headed by Richard Todd, Robert Morley, Jess Conrad, Dudley Sutton, Tony Garnett and Ronald Lacey. When the night watchman of a garage is found murdered, four young men are arrested and put on trial. Under cross-examination, suspects and witnesses give differing accounts of the same incidents that led up to the crime. After re-examining the suspects’ statements, the prosecuting counsel finally learns the truth. As a special BONUS FEATURE, the collection includes THE BOYS REUNION (2017) Talking Pictures TV reunited Dudley Sutton, Tony Garnett and Jess Conrad OBE, for the very first time since the film was made to celebrate the 55th Anniversary of the release of the film. In conversation with Morris Bright “The Boys” reminisce about making the iconic film, their fellow cast members and the importance of the film at that time, in the changing society of the sixties and how they feel today about the film still attracting audiences on TV and DVD viewings, after 55 years. The highlights of the event are presented in this exclusive programme for the very first time on DVD. As a second BONUS FEATURE, we include the ‘lost’ Pressbook and some of the original publicity shots from the film, to complete this fine salute to a truly remarkable British film of sixties cinema.

MYSTERIOUS MR NICHOLSON (1947) Directed by Oswald Mitchell. Stars: Anthony Hulme, Lesley Osmond, Frank Hawkins, Andrew Laurence, Douglas Stewart and George Bishop. A change in a will, a murder and a mysterious letter. The police look to a former cat burglar to aid them in this strange investigation in this crime thriller full of intrigue, false accusation and murder, made at Bushey Studios for Ambassador Film Productions.

THE VOICE OF MERRILL (1952) Directed by John Gilling. Stars Valerie Hobson, Edward Underdown, James Robertson Justice, Henry Kendall, Gary Marsh and Sam Kydd. The story of four people directly and indirectly involved with the murder of a female blackmailer. The suspects are the girl’s publisher employer; an up-and-coming writer, a brilliant established writer and his wife. Made at Southall Studios, Middlesex.

OPERATION DIPLOMAT (1953) Directed by John Guillermin. Stars: Guy Rolfe, Lisa Daniely, Patricia Dainton and Sydney Tafler. Dr Fenton, a surgeon operating on an unknown patient, discovers he is involved in the kidnapping of a British diplomat. When his personal secretary is murdered for revealing the patient’s identity, the police are called in. As a bonus extra, the film is introduced by Patricia Dainton in an interview about her time on the film. Made at Nettlefold Studios, Walton-on-Thames.

PORT OF ESCAPE (1956) Directed by Anthony Young. Stars: Googie Withers, John McCallum, Bill Kerr and Joan Hickson. Two sailors dock in London in search of a good time during their short stint on land. But when one of them fatally stabs a man during a scuffle in a bar, the pair flee the scene, commandeer a boat and take the three women on board hostage as they try to outrun the law. Made at National Studios, Elstree.

BLIND SPOT (1958) Directed by Peter Maxwell. Stars: Robert MacKenzie, Delphi Lawrence, Gordon Jackson, Anne Sharp, John Le Mesurier, George Pastell and Ernest Clark. A former Army officer regains his vision and hunts smugglers who framed him when he was blind. This film also boasts an early screen appearance from Michael Caine and an uncredited role as a garage mechanic for Arthur Lowe, who would later find fame as Captain Mainwaring in the sitcom Dad’s Army. Filmed at the Majestic Hotel, Kensington and at Walton Studios.

LADY OF DECEIT (1947) (AKA Born to Kill) Directed by Robert Wise. Stars: Claire Trevor, Lawrence Tierney, Walter Slezak, Phillip Terry, Audrey Long and Elisha Cook Jr. A calculating divorcé risks her chances at wealth and security with a man she doesn’t love by getting involved with the hot-headed murderer who is romancing her foster sister.

CHECKMATE (1935) Directed by George Pearson. Stars: Maurice Evans, Evelyn Foster, Sally Gray, Felix Aylmer and Donald Wolfit. Based on the novel by Amy Kennedy Gould, the film tells the tale of Inspector Smith, a detective from Scotland Yard, who gets more than he bargained for with a gang of London jewel thieves, when he becomes involved with the daughter of the gangs leader. This British “quota quickie” was shot at the British and Dominion Studios, Elstree.

This fabulous box set is a steal at our price of just £20, so do yourself a favour and grab a copy now! 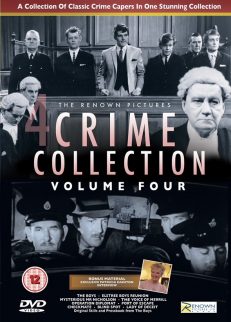 You're viewing: The Renown Crime Collection Volume 4 £20.00
Add to cart