Scotland Yard Needs You! Can You Solve The Crimes Before They Do??

THE LARGE ROPE (1953) – Stars: Donald Houston, Susan Shaw, Peter Byrne and Vanda Godsell. Directed by Wolf Rilla. After his release from prison, a man returns to the village where he was accused of murdering a girl — but is he the guilty one? In a race against time, he attempts to prove his innocence. (AKA The Long Rope)

THE HANGMAN WAITS (1947) – Stars: John Turnbull, Beatrice Campbell, Hylton Allen.
Directed by: A. Barr-Smith.Film following the attempts to catch the perpetrator of a string of grisly murders by a cinema organist. Visually compelling, with Hitchcockian opening scenes, this fascinating film was produced by Five Star Films using the settings of the newspaper press and the cinema. Good historic scenes of the News of the World Printing Plant and Victoria Station. The killer’s face is not revealed until almost the end — can you guess who it is?

ECHO OF DIANA (1963) – Stars: Vincent Ball, Betty McDowall, Geoffrey Toone.
Directed by: Ernest Morris. Joan Scott is distraught at the death of her husband in a plane crash — but all is not what it seems. When she reads his ‘in memoriam notice’ in a newspaper under the signature: ‘Diana’, Joan investigates — was it an affair; or something more mysterious — and is he really dead?

STRANGE HARVEST (1953) – Stars: Edgar Gray, Eve Shirley, Richard Antony and James Delamare.Directed by: Stephen Black. Presented by Keith Latham. Originally titled ‘The Reaping of Dead Man’s Field’. A man is left for dead in a cornfield by two men who steal his money and car. As the combine harvester begins to work the field, the men desperately try to retrieve the body before it’s too late… can you bear to watch? Filmed during the summer of 1953 in Lower Beeding, West Sussex, using actors from the Horsham Repertory Company, where a young ‘Michael Scott’ (later known as Michael Caine), was assistant stage manager.

DECOY – TO TRAP A THIEF (1957) – Stars: Beverly Garland with Frank Overton,
George Mitchell and Mary James. Directed by: Teddy Sills. Decoy (1957-1958) was the first American television crime series with a female police officer as the main character. The series focused on officer Patricia ‘Casey’ Jones, who worked undercover, assuming different characters in order to crack each case. In this episode, Casey has to solve a baffling armed robbery; what role will she play to solve the crime?

THE CASE OF CHARLES PEACE (1949) – Stars: Michael Martin Harvey, Chili Bouchier and Valentine Dyall.Directed by Norman Lee. Based on a true story, the film recounts the exploits of Charles Peace,the notorious Victorian murderer, through his trial, the preceding events recounted in flashback. Follow the exploits of this infamous and complex character, evil, yet fascinating. A John Argyle Production made at Merton Park Studios.

THE GRAYSON CASE (1955) – Stars: Mary Neelands, Bart Allison, Frederick Treves.
Written and directed by Keith Latham. The story describes how married Sally Turner’s affair with the painter Edwin Grayson led to murder. The case was solved by recognising the importance of a rusty, six inch nail… can you spot the clue? This intriguing short is narrated by J. St John Barry and was intended to be part of a series called ‘Crime Cameo’; made in the style of Edgar Lustgarten (British broadcaster and noted crime writer). Interiors shot at Ealing Film Studios; exterior shots at London’s Hyde Park; and the boat scenes at Sunbury On Thames.

NIGHT PROWL (1958) – Stars: Dennis O’Keefe as Dick Richards, the editor of Music magazine ‘Take 5’, who also solves crimes. Originally intended to be the pilot for a ‘lost’ TV Sitcom.

THE GELIGNITE GANG (1956) – Stars: Wayne Morris Sandra Dorne and Patrick Holt.
Directed by Terence Fisher. Set in London’s Soho, a gang of ruthless safecrackers plan their next robbery. As the plot lines intertwine, clues are scattered throughout the action — can you solve the crime before the final twist? (AKA The Dynamiters).

THE STABLE DOOR (1966) – Stars: Harry Fowler, Jack MacGowran, Dandy Nichols.
Directed by: Pat Jackson.A criminal gang conspire to rob a warehouse, but an insurance salesman has also spotted the vulnerable target. Will his precautions be accomplished in time to stop the robbery?

THE GENTLE TRAP (1960) – Stars: Spencer Teakle, Martin Benson, Felicity Young, Dorinda Stevens. Directed by: Charles Saunders. A locksmith is on the run after his first burglary, but a rival gang wants his haul. Twisting plot involving double crosses and diamonds — can you navigate the story and foresee the end? A Butchers production.

THE MAN OUTSIDE (1933) – Stars: Henry Kendall, John Turnbull, Cyril Raymond.
Directed by George A. Cooper. Henry Kendall appeared in numerous films, and was also an accomplished director, as well as an immaculately stylish revue artist. Here he plays a private eye investigating a case of stolen jewels at a country house who finds that people are not as they at first seem. Spot the surprising mastermind!

THE OTHER MAN (1956) – Stars: Bob Danvers Walker, whose distinctive voice could be heard on many British Pathé Newsreels from 1940 to 1970. Directed by: Norman Prouting, prolific documentary maker, particularly known for the British Transport Films documentary Railways for Ever! This short film is set in Camden and takes us on a visit to the Metropolitan Police Motor Driving School for an exercise in road safety. ‘The other man’ stops without warning, parks badly, doesn’t signal and exhibits the 1950s version of ‘road rage’! The film contains some great footage of bad driving.

NIGHT OF THE PROWLER (1962) – Stars: Patrick Holt, Colette Wilde, Bill Nagy, John Horsley. Directed by Francis Searle. Story and screenplay written by Paul Erickson, later to work on ‘The Saint’ and ‘Doctor Who’. Detective Inspector Cameron investigates the shooting of a car racing company executive. The man’s business partners fear their own lives may be in danger as the prime suspect is a former employee they had sent to prison. Plenty of red herrings, dead bodies, and an early car race, but can you beat the detective to the finish line?

Scotland Yard needs you! Can you solve the crimes in this intriguing collection? 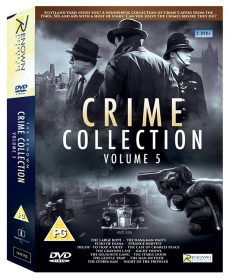 You're viewing: The Renown Crime Collection Volume 5 £20.00
Add to cart