11 CRIME FILMS from 1944 to 1966 including rare gems such as The Girl on the Pier with Veronica Hurst and the once lost short, Vacant Possession, with Brian Murphy and Daphne Heard. Sid James and Bonar Colleano star in Escape by Night and Boris Karloff investigates as Colonel March.

THE GIRL ON THE PIER (1953)
Director: Lance Comfort. This British crime film shot in 1950s Brighton depicts rivalry between a crooner who has done time for robbery and his partner in crime who is being blackmailed for a share of the loot. Cast: Veronica Hurst, Ron Randell, Charles Victor, Marjorie Rhodes & Campbell Singer.

CRIME WITHOUT CLUES (1948)
Directed by Charles Reisner. Can reporter Mike Kent prevent more deaths while he tries to resolve a sinister plot to steal a fortune in jewels? Cast: Sheila Ryan, Richard Fraser and Leslie Brooks.

THE WAY OUT (1955) AKA Dial 999 Montgomery Tully directed and wrote this British crime drama in which a man tells his wife he is being framed for murder. Cast: John Bentley, Sydney Tafler, Gene Nelson, Mona Freeman & Michael Goodliffe.

THE CROOKED SKY (1957) This British crime drama directed by Henry Cass centres on a smuggling racket between London and the US.
Cast: Wayne Morris, Karin Booth & Anton Diffring. 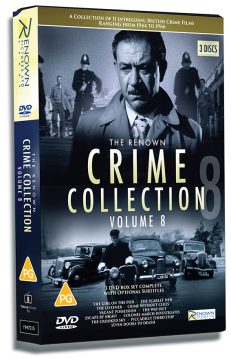 You're viewing: The Renown Crime Collection Volume 8 £20.00
Add to cart