View cart “The Renown Crime Collection Volume 7” has been added to your cart.

Over ten hours of murder, robbery, revenge and retribution in the ten features in this collection, with films from the 40s to the 60s, including the rarely seen Views on Trial  starring Jimmy Hanley; a classic Sherlock Holmes story, Terror By Night, with Basil Rathbone and Nigel Bruce; and Scarlet Thread with Kathleen Byron and Laurence Harvey; plus Anton Diffring NOT as a German soldier… all fully restored with subtitles.

The Marked One (1963)
A tale of forgery and kidnap directed by Francis Searle, starring William Lucas and Zena Walker.

You Pay Your Money (1957)
Director: Maclean Rogers. Stars: Jane Hylton, Hugh McDermott and Honor Blackman. The wife of a smuggler is kidnapped.

Terror By Night (1946)
Director: Roy William Neill. Sherlock Holmes story with Basil Rathbone and Nigel Bruce. A diamond is stolen on a train. 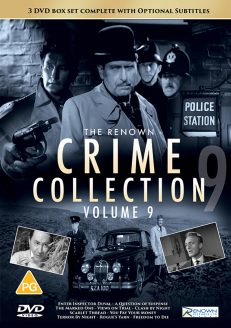 You're viewing: The Renown Crime Collection Volume 9 £20.00
Add to cart