Renown Pictures are delighted to present GLIMPSES COLLECTION: VOLUME 2. Over 60 individual pieces of nostalgia from the 50s & 60s in this superb 3 DVD Box Set. A collection of amateur footage, public information shorts and professional short films celebrating the 50s & 60s.

The Great Milk Bottle Mystery Where do 6.4 million glass bottles disappear to each week?
Aberdeen & Edinburgh in the 60s A nostalgic trip to Aberdeen, Balmoral and Edinburgh Castle.
Angling in Lowestoft (1960s) Archive footage of beach anglers enjoying shore fishing.
Canoeing and Camping in the 50s with scouts on the River Wye.
Getting Married in the 60s Looking back to a 60s English wedding.
Scotland in 1958 Explore one Scottish family’s milestones.
Switzerland in the 50s amateur colour footage of a trip around 50s Switzerland.
Tale of a Dog (1950) Vintage short about a sheep dog.
A Trip with the Harrisons In the 60s to Widecombe in The Moor, Lands End, Guildford and Dover.
Your Voice on the Telephone Early 1950s instructional film.
A Tale of the Fjords (1955): A beautiful presentation of two children hunting for the Valley Of Happiness.
Celebrity Crazy Cricket A 50s celebrity cricket match featuring Jon Pertwee, Tommy Cooper, Mr Pastry and more!
Screenagers! Early 1960s documentary into the spending habit of the ‘screenagers.’
Keeping Britain Tidy (1962) A short educational film on the problem of litter.
Knowsley Hall: short film made in the 50s on the stately home near Liverpool.
Man Against Mount Everest: A Castle Films Digest short and the 1952 Swiss attempt to climb Everest.
The 2nd International Offshore Powerboat Race (1962) the famous Cowes to Torquay race.
Ten Pin Bowling: 60s short film on a family hobby.
A 50s Whit Monday Race Meeting: Classic car race at Gamston airfield, Notts.
A Day Out in London (1950s): London landmarks.
A Sailing We Shall Go: amateur colour footage of a sailing club in the 50s.
A Works Group Day Out: 50s amateur footage of a work’s day out in Worcester.
The Brussels World Fair: footage of the exhibition in 1958.
Coronation Day 1953: Amateur footage of the villages of Coxhoe and West Cornforth celebrating the special occasion.
London Airport in the 60s: Rare footage the Airport’s daily routine, from the cleaners to the pilots.
1950s Newquay: Beautiful colour footage of a family gathering in Newquay and the famous “house by the sea”
Child’s Play: 1950s footage of families and children playing with toys and garden party games. There’s even dandelion clock – remember those?
50s London: Historic footage of London.
Gretna Green & Scotland: Amateur footage of an organised tour through Gretna shot in 1955.
Southampton & The Isle Of Wight: Take a 50s glimpse in this historic amateur footage.
Sports Day: Amateur footage of a traditional sports day in the 1950s.
The 50s Steel Works: The workings of a UK Steel works.
Sturminster Carnival: the 1962 Carnival.
When Motorways Were Fun: Early footage of the M1.
Fitness Wins the Game: an educational short.
Glimpses of 1967: Nostalgic footage.
Diving: A documentary on diving.
Lancashire the Home of Industry: We go down the pits, see inside a Cotton factory, Paper Mill, Hat Factory & more!
The Midlands in the 1960s: Filmed in the 1960s this documentary short covers the growth of the Midlands.
Mine’s a Terrier: A delightful look at some of the famous terrier breeds.
Pen Pictures from Denmark: A short film about a Danish child’s letter to his English friends about his holiday.
Petticoat Lane in the 1950s: Historic footage of the famous market.
Playing in the Road: A road safety short.
Sheffield Anglers 1960s: Documentary made in the 1960s following the weekly fishing competition.
Birmingham & The Road Patrol Bikes: 1950s – From Birmingham we follow the road patrol!
Pembroke Castle, Wales: Amateur footage from the 1950s.
The Clifton Suspension Bridge: Amateur footage filmed in the early 50s.
Motoring Around Europe in the 60s: From the ferry to driving through Paris and Italy.
Change Air Enterprises – The Flying Boat: The history of Empire Air Services and the flying boat situated at Croydon Airfield.
Steam Traction (1964): footage of the Steam Traction Engine Rally.
A 60s Holiday: Amateur footage of a family holiday in Cornwall and Devon in 1964.
Bristol & Scotland: Amateur footage of a 50s family trip to Bristol and then on to Edinburgh and the Royal Mile.
Pondsbury Marsh: Footage of a 1950s school trip.
The Power We Need: Made in 1962, the economic future of the coal industry in relation to other sources of power. Includes footage of Bevercotes Colliery in Nottinghamshire. Crowdy Cup Broxbourne 1966: A sailing competition in 1966.
Spring Blossoms: 50s nature documentary featuring some wonderful time-lapse film footage.
Scouting Competition 1952: Amateur footage at a fifties scouts Jamboree.
The Pinner Wheelbarrow Race: filmed in 1967 where men in wheelbarrows would drink a pint at each pub!
Unguarded Moment: The perils of Britain’s roads are seen in this chilling short film made in 1951 by The Blackheath Film Unit for the Greenwich Safety Board.

A truly historical collection of “Glimpses” of the past! 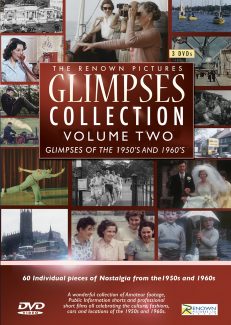