From the nation’s favourite TV channel, Talking Pictures TV, we bring you Volume 3 of the hugely popular series ‘Glimpses’. 59 individual ‘Glimpses’ of Britain’s past, a three DVD Collection.

A Ramble Around London – Insightful film of 1940s London. The docks, the cars, a barge on the Thames, big ships docking, Tower Bridge and a visit to Westminster Abbey.

A-Bob-In-The-Pound with Tommy Handley – 1943. The well-known British comedian Tommy Handley gets us to sing along to start saving for the war effort and brighter days to come.

American Legion 1937  – Made by former newsreel cameraman  Eugene W. Castle  in 1937. We follow the parade of legionnaires from all states as they parade down fifth avenue in New York and then to Times Square by night.

Midnight Around the Globe in 1945 – A WW2 propaganda film made by the US Army. Released as part of the 7th War Loan in May 1945. This film tracks war activities around the globe as Big Ben strikes midnight in London.

Bristol & Wales in 1964 – A nice little trip around Wales in 1964 including Raglan Castle and a family trip to LLawhaden castle and the Welsh coast – with a very empty beach.

Great Castles of The Middle Ages – Made in 1950  this short educational film looks at the remaining medieval castles around Great Britain. Some still standing, others sadly in ruins.

A Day in the Life of the Children of the North Sea – 1936. Directed by Hubert Schonger. We follow a fishing village family as they go about their daily duties, all in harmony with the North Sea way of life.

Cornish Ramble – 1946. Directed by Paul Barralet. A Travelogue of Cornwall in the late 1940s. A place where superstition and legend are part of a way of life. We visit many of the famous landmarks and a tin mine.

Cornwall Calling – 1930. Beautifully photographed film of an Austin engine being fitted into a yacht then sailing around Cornwall visiting coastal villages from Rye to The Lizard. Some villages by Austin Motorcar.

The Crofters of Achriesgill – Made in 1945 and Directed by Ralph Keene. Shot in and around Achriesgill, a crofting community in Sutherland  it tells the detailed story of this community in the 40s.

Dover – 1943. US broadcaster Edward Murrow looks back at Britain’s stoic response to the Battle Of Britain in this short film produced by the Ministry of Information.

Down The Thames – Take a trip aboard the Actief  as it floats down the Thames in the early 1980s. We visit Windsor, Marlow and meet the boat builders in Hurley.

Bushey Heath – Rare archive footage of the town of Bushey Heath in the 1960s, featuring a family get-together, a wedding and a stroll down the river.

London River Bus late 1940s – Take a trip on The Thames from Greenwich, where many of London’s historic features are to be seen: Tower Bridge, The Tower Of London, St Pauls,  the ‘new’ Waterloo Bridge & on to Westminster.

Cambridge in 1945 – A Glimpse at The University of Cambridge and students’ life in 1945,  the surrounding streets and the town itself.

Hit the Road Jack – A Comedy short. Very early silent made by Signet Films. Cars, trains, motorbikes, split screen shots and unbelievable stunts. It didn’t matter what was being chased! As long as it was fast!

Swing Tease – Enjoy performances from Nat Gonella, The Mills Brothers and Evelyn Dall in these clips from the film Sing As You Swing.

When Do We Eat? – 1926. After being abandoned without any food  a determined dog looks for some kind souls to help her feed her pups.

Guernsey in the 1970s – A Charming 1970s travelogue of Guernsey. St Peter Port and a tour of the island with commentary. Great shots of a typical 1970s holiday on a very special island.

Land of Contrasts – 1944. Factual. Short documentary film about the contrasting faces of Switzerland – from the Medieval Chillon Castle to the bustling city of Zurich.

Petula Clark ‘The Day Begins Early’ – A behind the scene look at Petula Clark’s working day in 1948  from a lost news piece.

Sheep Dog – 1939. Directed by Francis Searle and Narrated by Neal Arden. Insightful documentary short set in the Welsh mountains. The tale of Tom Jones and his sheep dogs and their daily routine.

Sunshine Island  – 1939. Sunshine Island. Documentary short exploring the island of Madeira told from the perspective of a sea captain.

Sweden In the Late 1940s – An insightful documentary on Sweden and its freight and industries.

The Eternal Fire – 1938. Shot in Technicolor by Jack Cardiff as part of the Windows of the World Series. A tour of Mt. Vesuvius & surrounding areas focusing on Pompeii. Directed by Pietro Francisci & Hans Nieter.

Report On Litter – Early, possibly 1950s, Public Information Film on the rising concern of litter at Wembley Stadium and in our parks and gardens. Take your litter home with you!

The Ideal Home Exhibition March 1964 at Olympia. The trends, products and bustling crowds.

Our Weekends in 1949 – Narrated by Ralph Richardson. A charming short film made in 1949 following London workers on their weekends in the country. Cricket on The Green, Picnics at the Lido, Boating  Bowling & Fishing.

The Fishmonger in 1947 – A delightful educational short film set in Barkingside High Street, Ilford, Essex about the Fishmonger and his working day including a trip to Billingsgate.

The Forbidden Frontier – Made by Sir Philip Gibbs one of five British reporters during the First World War & Directed by Hans Nieter. The crew go around Europe’s Cities in 1937 to discuss current events with the locals.

The Puddle-Muddle Riddle – 1947. Director Hans M. Nieter. A charming road safety film made for children in the late 40s.

The Worker & War-Front Magazine – A wartime magazine made to motivate and inform war workers commissioned by the Ministry of Information and screened in factories. This was the final issue, made in 1945.

War Time London – Footage of London in war time. Focussing on Piccadilly Circus then The Strand and Westminster. Shot around 1944.

We Three – Documentary made in the 1950s about life on a sheep station in the isolated outback  Australia. Great to see the boundary dogs on motorcycles & the counting methods of the herds along with daily life.

Wool To Clothing in 1947 – Life on The Range in 1947 as a Sheep farmer living in his covered wagon with ‘Boots’ the sheepdog.

Your Local Council 1949 – Film made in 1949 explaining how the Parish council and Country council work together to ensure that a tree survives when a new pavilion is built!

The Tale Of Elsie Bossing – Introduced by Henry Cooper and made in 1972. A stop-motion animation story of a difficult old woman who takes risks crossing the road. Narrated by the great Cyril Fletcher, story by Peter Hart.

1940s Speed Skating – Made in the late 30s early 40s narrated by Kent Stevenson – The introduction to England of the hobbies of Ice Hockey Figure Skating – and what a great night out it is!

Come Back To Erin – Made in the early 1930s. A travelogue of Ireland and its history and cultures, including a short interview with President William T Cosgrave.

Harry Roy In Floor Show – 1935. A short extract from ‘Floor Show’ starring British bandleader and clarinettist Harry Roy, singing ‘I Fell in Love with the Girl from the Poster’

Sea To Plate & Billingsgate – 1956. Documentary on the distribution of fish throughout England.  From Tower Bridge at 6am at Billingsgate in the 1950s to all the little harbours around the coast and everything in between.

Daily Checks For Your 1970s Moped! – Early 1970s educational film made for David before he rides his Moped off to school – remember your safety checks including checking your plug washer! 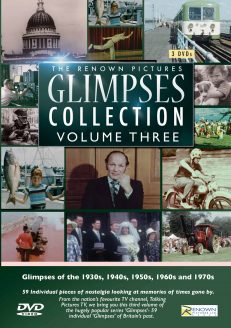