A selection of “Glimpses” from the nostalgic hit TV Series brought to you by Talking Pictures TV. This fabulous 3 DVD box set collection brings you 60 “Glimpses”, rare pieces of nostalgia from the 1940s & 1950s, never before seen on DVD and restored for your enjoyment.

PEWTER MINING in 50s Cornwall to the table teapot
SAIL HO (1941) comic look at yachting on the Australian coast
TRE, POL & PEN (1943) an educational short on the unusual, lore and people in Cornwall
GROWTH OF LONDON (1951) from the Roman settlement to 1951
JOINING THE YOUTH CLUB IN 1942 Educational short
KNOWSLEY HALL a 50s short on the Stately Hall
LAKE DISTRICT in 1955 with footage of Lake Windermere
LET’S VISIT THE CROFTER’S Shetland Island crofter’s farming
LIVERPOOL & HARROWGATE 1955 nostalgic 50s footage
LONDON FOOD MARKETS in the 40s rare footage of the market halls and dock area in the 1940s
LONDON’S WEST END in 1946 take in Oxford Street and the West End of London for a step back in time
PILBOROUGH IN THE 1950s WITH THE MORRISONS traditional summer family footage
ROAMIN’ IN SCOTLAND historic locations and people
THE ROCK OF GIBRALTAR short documentary
SEEN AT THE ZOO IN 1948 see the pandas and penguins
SIX CANDLES (1960) short documentary on road safety sponsored by the British Insurance Association
SOUTH OF ENGLAND & CORNWALL rare colour footage
A DAY AT THE DERBY in the 50s, place your bets with the bookies
BRIGHTON IN THE 1940s nostalgic footage from the 1940s

Remember the bygone eras of the 1940s & 50s in this unique Glimpses Collection for the very first time on DVD. 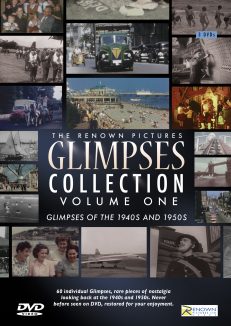