Volume 5 of the hugely popular series ‘Glimpses’. 44 individual pieces of nostalgia from the 1930s to the 1970s.

Disc One:
A Day Begins in Manchester (1960s) Early morning in Manchester.
I Know What I Like (1973) A ‘lost’ short on beer brewing, with Bernard Cribbins OBE.
Sheffield Steel – Made in the 1950s. From Thaxted to Sheffield, a history of steelmaking with incredible snapshots.
Learning to Live A look at the 1941 Britisheducation system, with shots of Merton Park.
England in 1951 We visit London, Sheffield, Birmingham, Coventry, and more.
Travel to London in 1971 An advert for a new package holiday to London.
New ‘Light Orchestras’ (1939) Stars: Leslie Jeffries, Reginald King & Eugene Pini.
The Eternal Fire (1938) A tour of Vesuvius and Pompeii.
The Pacific Salmon Run The Pacific Salmon Run, 1930s.
Crosby Favourites 1949 sing-a-long of some Crosby favourites, with the King Sisters & Gene Morgan.
Speed Crazy A 1950s hair-raising adventure through the streets of London, ending with a train ride at 700mph.
Spectacular Disasters Not for the faint hearted, a 1940s documentary with footage of major disasters in the 1900s.
Running for Pleasure 1970s greyhound racing.
South of Naples 1964 Naples with Patricia Mortland.
Down to Lisbon by Sea Luxury sailing in1962.
The Outer Hebrides Rocket Range A journey around the Outer Hebrides in the late 1960s, by plane, by boat, on foot and by car! Astounding footage of the remotest areas.

Disc Three:
Veteran Cars in 1953 with Kay Kendall, John Gregson and Genevieve, the car from the film!
The Channel Islands in the 50s Travelogue featuring a trip to the Odeon and the Methodist movement.
As Time Goes By 1940s Aeroplanes and Motor Cars.
Four Legged Lightning Film on racing greyhounds.
London in the 60s Playgrounds and housing in London.
Ploughman’s Holiday Ontario farmers in 50s England.
The British Isles in the 1930s Footage across Britain.
The Silent Hope London’s schools for the deaf, in 1959.
The Hillman Minx in the 1960s A road race featuring Sheila Van Damm, owner of the Windmill Theatre.
Overseas Trade Overseas trade in the Commonwealth.
Holiday Snapshots of 1958 Amateur film by the pupils of Lockleaze School and their teachers as they visit Europe.
Without the Option with Mavis Villiers Silent 1920s film. Mavis Villiers arrives in England on the Queen Mary.
Over the Hills & Far Away 1960s England & Wales.
Salvation Army Trip from London to Scarborough Life in the 1930s with the Salvation Army. 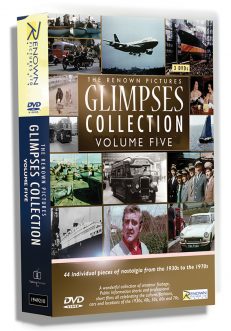