Stockport in 1959 Beautiful colour documentary of Stockport in the late 50s.
Their Invisible Inheritance (1945) Housing problems in post war Britain.
The History of Shippams in Chichester (1954) A charming history of the famous Shippams Paste company.
Steering Clear (1960s) The “new” highway code, remember, ‘Mirror, Signal, Manoeuvre’!
Designing Women (1947) Central Office of Information film featuring Joy Shelton and Harry Geldard as a young couple.
Classic Car Rally Around Europe (1969)
A convoy of classic cars travel through Europe, including Luxembourg, Zurich, Rome, Greece, Stockholm and Denmark.
Angling Looks Ahead An overview of angling in the 1960s.
Welcome to North Wales A trip around North Wales, in the late 50s/early 60s, including Llangollen.
Jersey in the 1950s Welcome to the rugged coastline of Jersey, with bracing sea, sailing and beach picnics.
Glorious Devon in the 1950s Made in the late 50s, a couple reminisce about a happy holiday in Devon.
Everything By Design (1971) A look at the production of products that were big household names in the 70s!
London Postcard (1940s/50s) Amateur travelogue of a visit to London with Piccadilly Circus and the Houses of Parliament.
All in a Day’s Fishing (1969) – Filmed in colour with G. Bolderston (angler), who explains how to cast the line.
The South Bank Exhibition 1951 Amateur footage of a trip to the renowned Festival of Britain.
The Royal Mint (1940s) An interesting short film made showing the workings of The Royal Mint.
The London Scene (1951) A promotional film with black and white footage of London in springtime.
On Cambrian Heights (1941) A travelogue of Wales.
Let’s All Go To Margate (1970) Michael Aspel shows us the delights that Margate has to offer!
Pre-WWII Germany (1930s) Fascinating black and white footage of pre-WWII Germany.
How to File Early 1940s instructional film demonstrates how to efficiently use a file in the workshop.
Far and Wide (1937) Incredible photography for the 1930s, time lapse techniques of plants and seeds.
Copenhagen in the 1950s Charming footage of the capital of Denmark in the 50s.
A Sunderland in Civvies A 1950s film about the Sunderland Flying Boat with astounding colour footage.
Tread Carefully 1960s road tyre safety film featuring Professor Stanley Unwin and Raymond Baxter.
From Ship to Shelf (1970s) A film follows the journey of 15000 chests of tea after they arrive in Bristol.
Portrush in 1959 The Logan family travel to Portrush.
Moving With The Times (1957) A look at British industries.
Inectocolour 1960s colour film on using Inectocolour hair dyes, with vintage footage of 60s hairstyles.
Talking About Kitchens (1950s) Gilbert Harding describes how to efficiently plan your kitchen.
Brooke Bond The Magic Stamps (1950s) Black and white film featuring the famous Brooke Bond chimps.
Friend or Foe (1940s) – Made during WWII, training film featuring tanks and armoured vehicles.
Jivin’ and Jammin’ (1948) The Maurice Arnold Sextet open and Scottish jazz singer Dinah Kaye.
The Little Car (1972) A charming colour film written by Gwen Dunn and filmed by Peter Boulton.
Paris in 1961 An elegant woman explores the streets of Paris in the 1950s, with chic fashion and vintage cars.
Beautiful Holland (1920s-30s) Fascinating black & white short film with footage of Marken,  Aalsmeer and Volendam.
The Boat Race (1938) Footage of the 1938 Boat Race with a very different shoreline, no high rises! 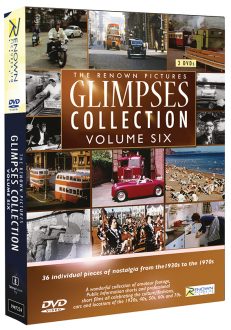