THE APE Directed by William Nigh, this horror thriller stars Boris Karloff, Maris Wrixon and Gene O’Donnell. Dr. Bernard Adrian (Boris Karloff) is researching a way to help a wheelchair-bound patient. The only way he can achieve this is by procuring spinal fluid from a human. When an ape escapes from a circus, Dr. Adrian kills it and successfully uses its spinal fluid, but he needs more.

CREATURE FROM THE HAUNTED SEA Filmed in Puerto Rico, this comic horror is directed by Roger Corman and stars Anthony Carbone, Robert Towne and Betsy Jones-Moreland. During political unrest on a Caribbean island, scheming criminal Renzo Capetto (Anthony Carbone) sees an opportunity. He promises to transport a group of exiles out of the country while also taking part of the national treasury. Followed onto the boat by an American agent, Capetto plans to kill off the exiles and blame their deaths on a sea monster.

CLAWS This American made horror-chiller is filmed on location in Alaska. Directed by Richard Bansbach and Robert E. Pearson, it stars Jason Evers and Leon Ames. Hunters wound a grizzly bear in a national forest in Alaska and the wounded animal begins killing people. 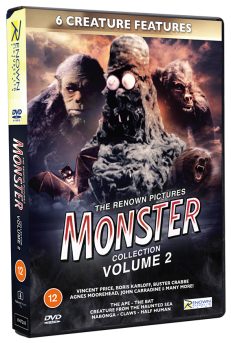