GORGO (1961) with Bill Travers. When an undersea volcano sends tremors throughout the Atlantic, aquatic creatures come out of hiding. Merchant seamen Joe Ryan and his partner Sam Slade harness the most unusual of the lot, a massive beast that looks like a Tyrannosaurus Rex. The sailors deliver their quarry to a British circus, but it turns out that the animal is a newborn. When his much larger mother arrives in London to rescue her son, the city feels her wrath. Directed by Eugène Lourié. Cast: Bill Travers, William Sylvester, Vincent Winter, Christopher Rhodes, Joseph O’Conor, Bruce Seton, Martin Benson, Basil Dignam, Mick Dillon.

THE GIANT GILA MONSTER (1959) stars Don Sullivan & Lisa Simone. After a couple of teenagers go missing in a small Texas town, everyone assumes they’ve run off to the big city. However, when their bodies are found in a nearby creek, the sheriff  is puzzled as to what could have killed them. The leader of a local hot rod group agrees to help the sheriff, and together they discover evidence of a giant lizard roaming the desert. Soon the lizard is terrorizing the town. Directed by Ray Kellogg. Cast: Don Sullivan, Lisa Simone, Fred Graham, Shug Fisher, Bob Thompson, Janice Stone, Ken Knox, Gay McLendon.

BONUS FEATURES: MAN OR BEAST – a short documentary on early Hollywood monster movies including: Dr Jekyll & Mr Hyde, Hunchback of Notre Dame and Phantom of the Opera + VERA DAY – exclusive insight into her life in films and introduction to her movie THE WOMANEATER! 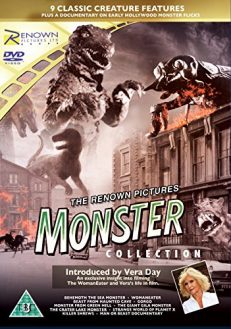 You're viewing: The Renown Pictures Monster Collection £20.00
Add to cart