A mildly terrifying collection of over 11 hours of vintage chills and thrills in our 3 DVD box set containing 9 films and bonuses introductions by Patricia Dainton for Tread Softly and The House in Marsh Road.

THE HOUSE IN MARSH ROAD (1960) starring Patricia Dainton, Tony Wright, Sandra Dorne and Sam Kydd. When Jean Linton inherits a house she hopes it will be a new start for her and her failing writer husband, but when he plots to do away with her, the house has other ideas. Director: Montgomery Tully.

THE TROLLENBERG TERROR (1958) starring Forrest Tucker, Laurence Payne & Jennifer Jayne. A series of decapitations on a Swiss mountainside appear to be connected to a radioactive cloud. Director: Quentin Lawrence.

FIREMAIDENS FROM OUTER SPACE (1956) starring Susan Shaw, Paul Carpenter and Harry Fowler, a team of astronauts land on a moon of Jupiter, discovering a population of beautiful young women looking for mates, but also discovering dangers there. Director: Cy Roth.

TREAD SOFTLY (1952) stars John Bentley and Patricia Dainton in a story about a haunted theatre. The show must go on but people are dying to keep a dark secret surrounding a 40 year old murder. Director: David MacDonald.

BLOOD OF THE VAMPIRE (1958) The Scream Queen actress Barbara Shelley, Donald Wolfit, Vincent Ball and Victor Maddern star. A mad scientist – believed to be a vampire – is conducting a series of experiments on the inmates of a prison hospital for the criminally insane, in order to sustain his own return to life! Director: Henry Cass.

THE FALL OF THE HOUSE OF USHER (1950) stars Gwen Watford, Kaye Tendeter and Irving Steen. A traveller arrives at the Usher mansion to visit his friend, Roderick Usher and finds both he and his sister are suffering from a mysterious malady. That evening Roderick tells his friend of the Usher curse and as the days draw on the effects of this curse reach a terrifying climax. Director: Ivan Barnett.

CROW HOLLOW (1952) stars Donald Houston, Natasha Parry and Patricia Owens. It tells the story of the newly-wed wife of a young doctor who goes to live with him in an oppressive old house where various and mysterious attempts are made on her life. Director: Michael McCarthy.

THE CURSE OF THE WRAYDONS (1946) stars the first British horror star, the great Tod Slaughter with Bruce Seton and Henry Caine. A young Captain, after participating in a duel, becomes the main suspect of a series of killings in Epping Forest. Now the only way that he can prove his innocence to the police is to find and trap the real killer, who maybe is closer to home than he imagined him to be! Director: Victor M. Gover. 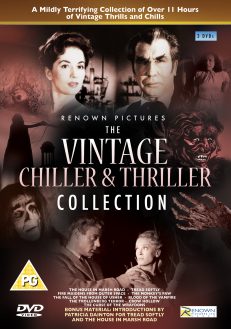 You're viewing: The Renown Pictures Vintage Chiller and Thriller Collection £20.00
Add to cart