Made by Publicity films at Merton Park Studios. A “Lost” short film on the workings of an English car garage, featuring the right and wrong ways to treat a customer. Includes glimpses of the Ford Eight and the Ford Popular, Prefect and Pilot.

An Austin A40 is taken off the production line and driven around the world by a team of drivers, acting as a travelling ambassador for the Festival of Britain. The team made good time through Europe, then on to Beirut, Damascus and Bombay, surviving the gruelling journey through deserts and across the Pacific by air to Los Angeles, through America, Canada and a final air hop back to the UK. The plan was to go around the world in 30 days but the small British family car made it in just 21 and the team won their bet of half a crown!

A stunningly prophetic old news feature on the motor car and its place in the world. Made in the late 1960s / early 1970s.

A film about the first gas turbine aero engine developed by Air Commodore Sir Frank Whittle, OM, KBE, CB, FRS, FRAeS, an English Royal Air Force officer. He is credited with single-handedly inventing the turbojet engine. Features detailed information about the way the engine works and footage of experimental planes in flight and footage of the 1949 Farnborough Show where the De Havilland Comet, the world’s first commercial jet airliner, made its first public appearance.

All That is England

Made by Merton Park Studios in the 1930s and directed by Ralph Smart. A promotional Film on Austin Cars – from the 7 to the Ascot.

Charming amateur footage of steam trains chuffing along in the 1950s, set to music.

A film made by luxury car manufacturers Daimler and Benz in the 1950s to celebrate their partnership. The film traces the history of the ‘three-pointed star’ from inception, across all the major Grand Prix events from the 1920s through to the 1950s. The three-pointed star symbolises the use of Daimler engines on land, at sea and in the air.

Vintage footage of daring aerial displays including an early helicopter, bi-planes with smoke trails, formation flying and aircraft of the day in superb detail. Also shows refuelling, bomb loading and overstrands formating, all part of the glory days of aviation.

Fascinating footage from the late 50s and early 60s of cars on a race track in the snow, with interesting commentary on the cars of the eras.

This short film, made by Richard B. Morros, will be enjoyed by fans of very early steam engines. The nostalgic visit to bygone days of transport features reminders of the familiar whistle of the steam train and the chug of the old railroad.

This short film was made by a family on holiday in 1938. It features a visit to Rugby for a parade, footage of Stratford on Avon and Kenilworth and a great tour of The Standard Motor Car Factory in Coventry. A genuine glimpse of England in the late 30s.

A charming film made in and around Harlow, Essex on the trail of the new ‘dial a bus’ scheme. Featuring great shots of 1970s England.

Directed by Maurice Elvey. Starring Leslie Banks and Kay Walsh with Mackenzie Ward, Cecil Parker, Simon Lack, Ellen Pollock, Peter Shaw, Nigel Stock, Kynaston Reeves and Charles Eaton. The Head of Dartmouth Naval College is murdered but was he the intended victim? Captain Hyde realises that British and foreign intelligence agents are at work and enlists the help of his son, a sea cadet, to smoke them out. Shot during the summer of 1939, just before the outbreak of World War II, which is one of the themes of the film. It was made in colour; the only feature film to do so using the Dufaycolor process, a similar method to the Autochrome process.

Directed by Robert Tronson. Starring John Collin, Michael Brennan, Ewen Solon and Jean Aubrey with Robert Brown, Victor Platt, Gerald Harrison, Laura Thurlow and Cdr. Hill. A portrayal of The Royal Life Boats based in Teesmouth, showing how the crew operate when they are really needed.

A look at the world of car rallying in Switzerland, the preparation for race day and on the road racing. Features footage of racing cars in the workshop and driving on closed public roads through snowy conditions with frantic pit stops and quick decisions. With commentary by Jeremy Martin and featuring racing drivers Andre Savary and Jean-Robert Corthay. Made in the 1970s. 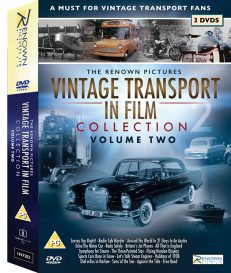 You're viewing: The Renown Vintage Transport in Film Collection Volume 2 £20.00
Add to cart