The Ronald Shiner Collection: Beauty and the Barge/Keep It Clean

Gordon Harker, the celebrated comedian, appears as Captain Barley, the truculent bargee. He finds himself embroiled in the romantic escapades of Ethel Smedley, who is running away from a loveless marriage and her ardent swain Lieut. Boyne. It was produced by Julius Hagen`s production company Twickenham Film Studios, but made at the Riverside Studios in Hammersmith rather than at Twickenham. It was based on the 1905 play Beauty and the Barge by W. W. Jacobs.

When Bert Lane (Ronald Shiner) is given the task of advertising Mrs Anstey s famous crumpets, he decides to focus on the sexy side of crumpets. But his tawdry advertising slogans incur the wrath of Mrs Anstey and her Purity League, as well as his boss (James Hayter). Having tried every trick in his wheeler/dealer book to win her back over with charm, Bert has to face an angry posse of female morality campaigners catching up with him in a striptease joint! Throw Vi Tarbottom (Joan Sims) and Slogger O Reilly (Denis Shaw) into the mix and a feast of British comic chaos is guaranteed.-

A rollicking comedy adventure with Brian Rix and Ronald Shiner playing two cabin stewards bound for Tangiers aboard a cruise ship. As comedy enthusiasts would expect, Rix loses his trousers as the two bumbling stewards attempt to uncover the identity of a jewel thief and recover the priceless diamonds of a wealthy passenger. 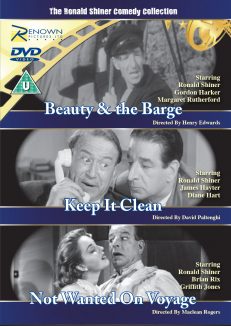 You're viewing: The Ronald Shiner Collection: Beauty and the Barge/Keep It Clean £10.99
Add to cart