The Rough and the Smooth

One Of The most daring Drama of Sex and Passion ever filmed,

Robert Siodmak had left behind a successful Hollywood career in 1952, just as McCarthyism began to rear its head. He subsequently made several films in Germany and France but this was his only British feature. He was complemented by a fine technical line-up, including Otto Heller on camera and set designs by Ken Adam.

An archaeologist forsakes his fiance for a passionate affair with a beautiful
young German woman. But Ila has more than love on her mind…

While the film`s star, Nadja Tiller, was unknown in Britain, she had starred in many German films and was Miss Austria in 1949. Ila`s foreignness is key and Margaret`s slightly prim glamour is no match for her continental seductiveness. But the promise of sex masks something more dangerous and giving her body so freely signals Ila`s emotional deadness. Mike learns his lesson the hard way.

…intended to show the decadence and corruption that lies at the heart of the British establishment.â€ RADIO TIMES

Hollywood director Robert Siodmak, a film noir specialist, brought his talents
to Britain for this thriller that trades on its steamy sex scenes. RADIO TIMES 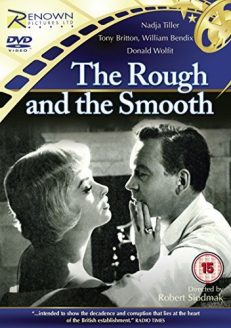 You're viewing: The Rough and the Smooth £7.99
Add to cart