View cart “THE SECRET WAR on DVD – produced in conjunction with the Imperial War Museum.” has been added to your cart.

THE SECRET WAR on DVD – produced in conjunction with the Imperial War Museum.

Produced in conjunction with the Imperial War Museum.

During World War II, behind the fighting, there was a secret war fought by scientists and engineers. Produced by the BBC in conjunction with the Imperial War Museum, The Secret War lifts the veil of secrecy on the crucial roles science and intelligence played behind the lines in winning World War II and documents secret technical developments during the war. Presented by William Woollard, (Tomorrow’s World), the series is based on the book Most Secret War by Reginald Victor Jones, CH, CB, CBE, FRS, FRSE, LLD, key consultant and interviewee. It first aired in 1977 to critical acclaim. This insightful and revealing documentary series covers the rivalry between the British and the Germans as they struggled to find a winning edge with innovations from radio navigation to naval mines and missiles. Each technology is investigated in thorough scientific detail. Yet throughout, it is the triumph of the human spirit that sets this series apart. The focus is on the science, but the heroism of the individuals fighting against the odds through those terrible times, shines through.

Interviews with key pioneers on both sides are included, such as Air Commodore Sir Frank Whittle, OM, KBE, CB, FRS, FRAeS, (creator of the turbojet engine); and Hanna Reitsch, a German test pilot and the only woman to be awarded the Iron Cross. The programmes make full use of Imperial War Museum archives and include rare wartime footage.

Episode 1: “The Battle of the Beams”
British intelligence became aware of various Luftwaffe navigation beams, such as Knickebein, X Gerät and Y Gerät and developed countermeasures to combat them. The episode contains footage of the Blitz including Coventry. Interviews with Albert Speer, Sir Robert Cockburn and Air vice-marshal Edward Addison.

Episode 2: “To See for a Hundred Miles”
The development of radar and the creation of the Chain Home system in time for the Battle of Britain. British intelligence launches Operation Biting (the Bruneval Raid) to capture a Würzburg system. Features interviews with Arnold Wilkins, John Randall, Harry Boot, Bernard Lovell, and Donald Bennett.

Episode 6: “Still Secret”
The Enigma machine and the Lorenz cipher; how the codes were broken at Bletchley Park. Includes some information on Colossus, the computer that was still secret when the programme was made. Interviews with Gordon Welchman, Harry Golombek, Peter Calvocoressi, F. W. Winterbotham, Max Newman, Jack Good and Tommy Flowers. 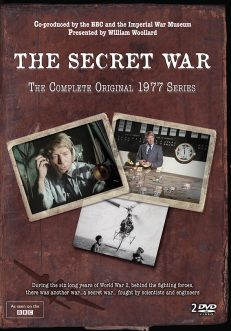 You're viewing: THE SECRET WAR on DVD – produced in conjunction with the Imperial War Museum. £15.00
Add to cart